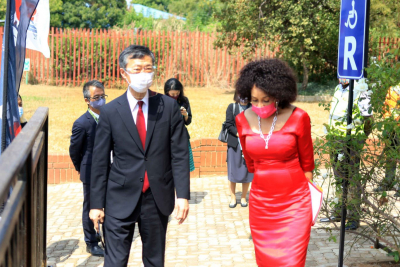 The centre was officially handed over by the Ambassador of Japan to South Africa, Maruyama Norio, during an event held at the Water and Sanitation’s Roodeplaat Training Centre outside Pretoria on Monday.

It was also attended by the Minister of Co-operative Governance and Traditional Affairs, Dr Nkosazana Dlamini-Zuma, Deputy Minister of Water and Sanitation David Mahlobo, President of the South African Local Government Association (SALGA) and Polokwane Local Municipality Mayor, Thembi Nkadimeng, and the MMC for Infrastructure in Tshwane, Councillor Phillip Nel.

The Japanese government, through the Japan International Cooperation Agency (JICA), funded the construction of the training facility at the Roodeplaat Training Centre of Water and Sanitation.

The training yard covers the basics of training artisans to deal with water losses in communities. The designs of the training yard were conducted by the department’s engineers with technical support from JICA.

The training of artisans comes against the background of growing concerns about the huge amounts of water losses – estimated at R9 billion a year in South Africa.

A South African company was contracted by JICA to construct the training yard. The department’s engineers will handle all the activities, including the maintenance of the training yard, to ensure sustainability of the programme.

Sisulu has taken ownership of the training yard on Non-Revenue Water Management built by the Government of Japan from Ambassador Maruyama.

Speaking at the event, Maruyama said the objective of his government’s assistance in South Africa’s water sector is to give support for skills development of local municipalities who are faced with challenges of water losses, known as non-revenue water.

"The area of non-revenue water is one of the major challenges Operation Vulindlela will drive in the economic reform of South Africa. The Japanese assistance will help municipalities to improve their performance in water services and to address challenges of economic reforms at grass root level," Maruyama said.

Sisulu said that water is under extreme threat from a growing population, increasing demands of agriculture and industry and the worsening impacts of climate change.

The Minister noted that the department and South African Local Government Association (SALGA) are faced with a similar challenge regarding the state of non-revenue water in South Africa.

She said the department will continue to work with SALGA, CoGTA and the metros in ensuring that the project delivers on its intended objectives.

Sisulu also emphasised that access to water and sanitation is recognised by the United Nations as human rights, reflecting the fundamental nature of these basics in every person’s life, she said.

Meanwhile, Dlamini-Zuma said her department is part of a process to establish a non-revenue structure which she hoped would bear fruit.

Dlamini-Zuma attributed the problem of water scarcity to the effects of climate change.

She also called for the revival of the culture of payment for services, which she said will contribute towards the improvement of water supply.