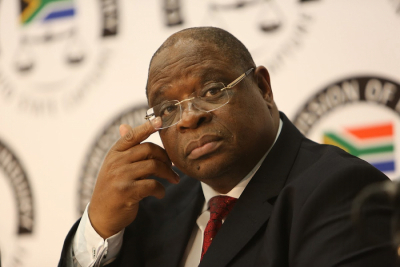 Meanwhile Public Enterprises Minister Pravin Gordhan faced questions about negative comments he made about Tom Moyane as the former Sars commissioner was finally able to cross-examine the minister at the state capture commission.

Gordhan had appeared at the inquiry in 2018 and implicated Moyane in his testimony. He accused Moyane of acting to serve the state capture agenda when he opened a criminal case against him regarding the establishment of the Sars "rogue unit".

Moyane and Gordhan have had a long legal history of disputes and disagreements which has culminated in Moyane's chance to question Gordhan at the inquiry. Moyane had accused Gordhan of racism.

Advocate Dali Mpofu, on behalf on Moyane, questioned Gordhan on some of the areas of Moyane's accusations. Moyane said Gordhan was attacking him because he had unearthed various corruption deeds that had been left by Gordhan when he had previously served as Sars commissioner.

When Mpofu asked Gordhan whether he agreed on whether state capture is similar to criminality, Gordhan said he partly agreed on the matter but the definition could be expanded.

Mpofu also questioned Gordhan on the Sars Sikhakhane report which had found that a rogue unit existed at Sars while Gordhan was in charge of the agency. Mpofu questioned whether Gordhan still stood by the fact that the report had been set aside.

Gordhan responded; "Since we last met there have been two judgements on certain reports from the High Court. It (report) had not been set aside but there is commentary on the report," Gordhan said.

Mpofu asked Gordhan about a court judgment which had found that Gordhan made "vitriolic statements" regarding a court case involving Public Protector Busisiwe Mkhwebane. Gordhan had also made the allegations against Moyane, Mpofu asked if he agreed that the statements made by him to the Constitutional Court were unnecessary.

"I agree and note what the Constitutional Court's view on the matter is," Gordhan said.

Mpofu also posed another judgment or commentary by the High Court which stated that Gordhan's views had also been unnecessary and that his words did not help his case. The court said the applicant (Gordhan) had gone overboard in  his criticism of the public protector.

Mpofu asked Gordhan: "Mr Gordhan, do you accept that six judges said you had gone overboard and were not adding constructive material?"

Gordhan took issue with the comments he had made in court applications being posed at him. He made it clear that even though the court judgments pointed with concern to his views, the ultimate judgments found against Mkhwebane.

Gordhan responded; "I accept that, but I ask the chair to note the outcomes of these judgments which were quite damning against the public protector".

Twitter
More in this category: « DBE says it has created over 300,000 jobs for 'school assistants' across the country. The 2020 matric learners have until Friday to register supplementary examinations. »
back to top