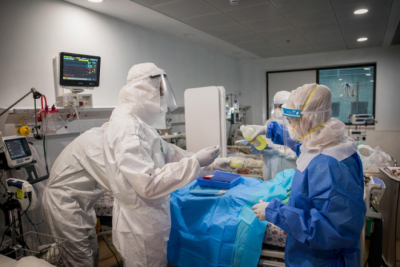 A statistical analysis by researchers at the Nelson Mandela University has indicated that a third Covid-19 wave could impact the two big Eastern Cape metropolitans of Nelson Mandela Bay and Buffalo City by the end of March or the beginning of April.

In a column for the Sunday Times, professors Azwinndini Muronga and Darelle van Greunen said that they are confident of the prediction as it is based on a range of local and regional data and on a year of national modelling.

"The runaway data at the moment signals more trouble is coming in the form of the third wave, but it won’t necessarily be the Eastern Cape driving it. It might be driven by the Western Cape and spread countrywide.

The second wave’s peak in the number of deaths indicates the new variant was deadly. We should be concerned."

The researchers said that their data shows the Covid-19 numbers in the Eastern Cape metros might be as much as five times higher than reported. This is because people with Covid-19 are also not admitting they have it and, at the same time, there is less testing being done at a time when it should be intensified.

"At present, it takes two weeks to a month or more for critical Covid-19 management decisions to be taken. In a pandemic, this is a very long time. The Easter weekend is coming up and the movement between provinces and religious gatherings are of great concern, as is the winter ahead."

"There’s no way we can avoid a third wave, but if strict preventive and management measures can be put in place, it can be less deadly."

Epidemiological experts at a national level have warned of superspreader events over the Easter weekend as a potential catalyst for a third Covid-19 wave which would hit closer to May/June.

"The concern is with Easter holidays that there might be an increase in movement which can increase spread of the virus and also Covid-19 fatigue with people becoming less compliant can be a concern," said senior researcher at Council for Scientific and Industrial Research (CSIR), Dr Ridhwaan Suliman.