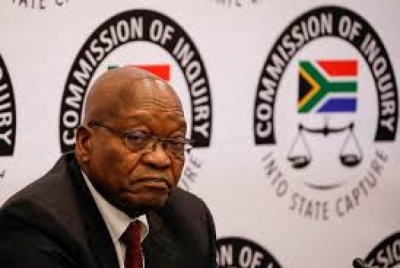 President Jacob Zuma should be brought by the sheriff of the high court to testify before the commission of inquiry into state capture in addition to being jailed for contempt of court.

This is the view of the Helen Suzman Foundation (HSF), which has asked to be admitted as amicus curiae (friend of the court) in the commission's Constitutional Court bid to have Zuma jailed for two years after being held in contempt of court for ignoring subpoenas issued by the inquiry - despite being ordered to do so by the apex court.

In its written submissions filed on Tuesday, the HSF suggested that an appropriate sanction for Zuma’s contempt may be an order for his committal for a minimum compulsory period.

The Foundation also wants an order which would curtail any further period of imprisonment if he voluntarily complies with the requirement to testify before the commission.

Or alternatively, it proposed an order that the sheriff of the high court be directed to bring Zuma to the commission to testify.

The HSF accuses Zuma of seriously impeding the functioning of the commission of inquiry into state capture, and undermining its ability to fulfil its crucial truth-seeking mandate.

It has told the apex court that Zuma’s conduct was setting a dangerous precedent in a young democracy, which has prided itself in its respect for the rule of law since the end of the apartheid regime.

According to the foundation, an appropriate sanction for Zuma’s contempt of the Constitutional Court must serve dual and interlinking punitive and coercive purposes.

The extreme conduct by Zuma justifies a punitive sanction for his failure to co-operate with the commission and to obey this court’s order. But the public interest in and right to the uncovering of the truth dictates in favour of the imposition of a sanction that seeks also to coerce Zuma to comply with this court’s order, and to appear and give evidence before the commission," the HSF explained.

It wants a sanction to be crafted that not only vindicates the dignity of the apex court, but also assists the commission in uncovering the truth.

It cautioned that if Zuma, as a principal party before the commission, was allowed to evade his statutory responsibilities, all witnesses subpoenaed to give evidence could adopt similar dilatory and unco-operative tactics, safe in the knowledge that the court system was unable to ensure effective and punctilious compliance with the law.

Press Release 24 Mar: State Capture Commission's Contempt of Court Application. The HSF has applied for admission as amicus curiae in order to make submissions to the Constitutional Court on an appropriate sanction for Mr Zuma’s contempt.https://t.co/jsDTkkZYlr

Zuma is not participating in the matter, which will be heard on Thursday.