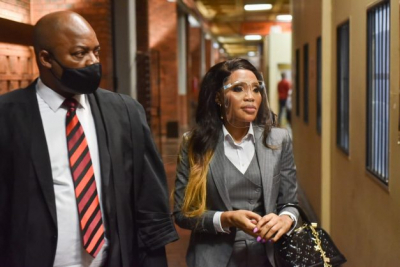 All charges against Norma Mngoma have been withdrawn.

The Pretoria Magistrate's Court made the ruling on Friday.

The estranged wife of former minister Malusi Gigaba was charged with crimen injuria and malicious damage to property.

The court decided to drop the charges against her, putting an end to over seven months of legal drama between former minister Malusi Gigaba and his estranged wife.

Her last appearance at the Pretoria’s Magistrates Court was in February and her attorney’s argued that due to the high court against the Hawks arrest in July 2020, where Judge Sardiwalla Cassism ruled that the arrest was unlawful and should be set aside. Adding that the arrest may have been motivated by an abuse of power by Malusi Gigaba.

Mngoma’s attorneys said this consequently meant the charges brought against Mngoma had no barring and should be dropped. The judge agreed, and said the Hawks should return Mngoma’s devices and restore all the information downloaded from them during their investigations.

Mgnoma was arrested after allegedly causing extensive damage to a multimillion-rand Mercedes-Benz driven by Gigaba. The couple is currently in the process of getting a divorce, Norma dropped the Gigaba surname after salacious allegations that her husband had had another affair.

In 2017 it was revealed Gigaba had an affair with a fashion stylist based in New York. Mngoma said at the time she was staying with her husband and they would work through this.

Norma said she is willing to appear before the Commission of Inquiry into allegations of state capture to testify about what she had seen seen during her marriage to Gigaba.

She alleged that by the time she and Gigaba got into a relationship, he was already involved with the Guptas.