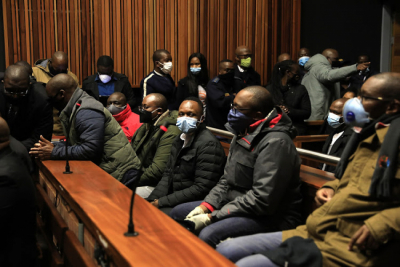 The theft, fraud and corruption case against 18 people suspected of being involved in the VBS Mutual Bank heist has been postponed to 2 August 2021.

Bail conditions have been extended for all 14 of the accused.

The National Prosecuting Authority’s (NPA) request that the matter be transferred to the Pretoria High Court for a pre-trial conference has been approved by the court.

Supporters of those implicated in the looting flocked to the Palm Ridge Specialised Crime Court in Katlehong on Friday.

Among the accused are top ANC officials from Limpopo, Danny Msiza and Kabelo Matsepe.

The 14 suspects are charged with a total of 188 counts, including theft, fraud, money-laundering, corruption and racketeering.

In 2018, the South African Reserve Bank placed VBS under curatorship and a forensic investigation was instituted to establish exactly what had gone wrong.

Advocate Terry Motau’s resultant 148-page report, titled VBS Mutual Bank – The Great Bank Heist, blew the lid on "a wide range of criminality in the conduct of the affairs of VBS" and recommended criminal charges be investigated.

The state alleges the accused looted nearly R2.3 billion from VBS’s coffers and doctored the bank’s 2017 financial statements to cover up the fact that it was insolvent.

In the meantime, the accused are all currently out on bail of R100,000 each.

Twitter
More in this category: « Gauteng residents expected to pay more for electricity and water. Traffic officers to wear body cameras to ensure safety for all road users. »
back to top