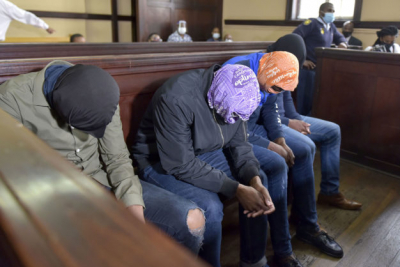 The four police officers charged with the murder of Mthokozisi Ntumba have each been granted R8 000 bail.

Tshepisho Kekana, 28, Cidraas Motseathata, 43, Madimetja Legodi, 37, and Victor Mohammed, 51, were given the bail at the Johannesburg Magistrate’s Court on Friday.

The four officers face charges of murder, three counts for attempted murder and defeating the ends of justice.

Magistrate Sipho Sibanyoni delivered the judgment on Friday: "Applicants one to four's application to be released on bail is granted. Bail is fixed at the amount of R8,000 per applicant who are accused."

They were arrested a few days after Ntumba was shot and killed in Braamfontein during the Wits students protest.

At the time, the students were calling for historic debts to be scrapped and free registration for all students in 2021, amongst other demands during their protest.

Police were called to the scene and Ntumba, who had just walked out of the MyClinic Medical Centre in Braamfontein, was shot.

He died at the scene.

The Independent Police Investigative Directorate had indicated that it would oppose bail.

During the bail application, Kekana told the court that he was a single Sophiatown resident with a two-year-old child. He added that he worked for the SAPS for two years prior to Ntumba’s death.

Kagiso resident Motseathata said he was married to an unemployed woman and had four children between the ages of 19 and two.

Krugersdorp resident Legodi, who has two previous drunk driving convictions, said he was the breadwinner who supported his two children aged 11 and four.

Father of a 11-year-old child, Mohammed, from Dobsonville, told the court that he has had a blemish-free record as a police officer since 2007.

The case is due back in court in May.

Twitter
More in this category: « Zikalala welcomes announcement of Queen Mantfombi as acting Zulu nation regent. Is the ANC heading for a split? 'Step aside' resolution in the spotlight at NEC meeting. »
back to top