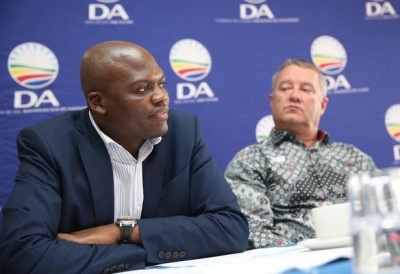 The Democratic Alliance in KwaZulu-Natal elected a new leader on Saturday.

Francois Rodgers will now spearhead the party in the province.

Zwakele Mncwango, who was the previous leader of the party in the province, opted not to run again after service two terms in the position.

In February 2018, Mncwango retained his position as provincial leader after receiving 347 votes to beat Emmanuel Mhlongo who only amassed 151 votes at the party congress held at Durban’s Olive Convention Centre auditorium.

The congress was meant to take place last month, but had to be delayed to allow 65 of the party’s 229 branches to be relaunched.

The DA provincial leadership had requested that the branches, mainly in rural parts of the province, be relaunched, because the party’s electronic voting system had not been used when they were launched initially. The party’s federal executive agreed and the branches were relaunched, with the last being certified two weeks ago.

Rodgers, 59, is a party veteran who started his career as the party’s lone councillor in the Kokstad municipality in rural northwestern KwaZulu-Natal.

Rodgers, who previously served as deputy DA leader in KwaZulu-Natal, said their main focus was on the local government election and these elections would have no bearing on the official opposition status, that they lost to the IFP in 2019 as that was for the general election.

The party has also grown significantly in rural communities in which it previously had little or no presence, a path that Rodgers said it would continue to follow in the province.

"I started off as a 'lone ranger' councillor at Kokstad. Based in a rural constituency, I didn’t see the party moving into the areas beyond eThekwini and Msunduzi. My interest is in trying to grow the demographic of the party in areas other than the urban centres, "he said.

Due to concerns around the COVID-19 pandemic, the conference took place virtually, with Chris Pappas elected as the new DA KZN Deputy Leader.