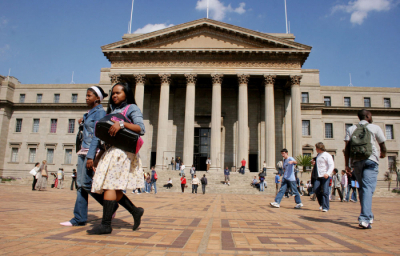 According to a department report, the Cape Peninsula University of Technology recently reported two cases, mainly related to the vandalism of fire extinguishers and fire hoses, with the bill for repairs amounting to R250 000.

"There were also reported cases of damage from arson which involved the burning of the pre-fab structure which is used as classrooms. The repair costs have amounted to R2 690 000, with R1.2 million still to be used for repairs.

"The Central University of Technology had violent incidences reported in 2020 during student protests on both the Bloemfontein and Welkom campuses. The costs for the repairs amounted to R1 457 201.84, and all repairs were completed in 2020," Nzimande said.

Rhodes University reported minor vandalism cases due to burglary or forced entry with the damage amounting to R5 000.

Six cases of vandalism to university property were reported at Sefako Makgatho University during the student protest in June last year. The repairs were valued at R30 220.

The University of Johannesburg reported seven cases of vandalism and repairs were done to the value of R202 826.30.

"The University of KwaZulu-Natal had several cases of damage to property and burning of buildings due to student protests in 2020. The value of repairs is R27 388 914.25. The repairs commenced in July 2020 and ended February 2021 this year.

"The University of Fort Hare had incidents of vandalism in March 2020 and December 2020. It cost the university R468 000. Repairs to the value of R68 000 were carried out and repairs totalling R400 000 are due for completion in July this year.

The Minister said the current information is based on information received from 21 universities.

"Given the incidents, the total cost of repairs that have been completed, as well as those still to be carried out, amounts to R32 791 397,39. None of these acts and massive losses incurred could be justified or associated with any legitimate forms of protest and should be condemned unequivocally by all, including our student and union stakeholders.

I" am also convinced that all progressive stakeholder organisations will agree that criminal and violent acts have no legitimacy in genuine political protests around demands for greater equality in post-school education and training," Nzimande said.

The Minister has called on law enforcement agencies to act swiftly against any acts of violence and destruction of public and private property.

He called on university vice chancellors to tighten up appropriate safety and security measures to prevent any form of destruction and to protect life and limb.

"The destruction of property is a criminal offence and all those engaging in such acts must be apprehended by law enforcement agencies and face the full might of the law," the Minister said.

He said the acts of sabotage undermine the significant advances made by government since 1994 in progressively expanding access to, and success in both universities and colleges across the length and breadth of South Africa.

Twitter
More in this category: « Nathi Mthethwa orders a probe into mismanagement of NAC funds. Traffic officers to be kitted out with bodycams to curb bribery. »
back to top