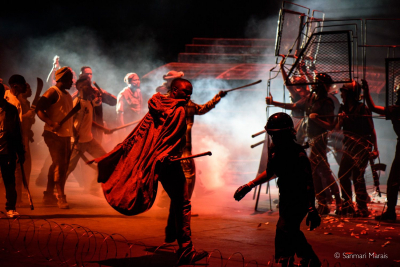 The Minister made the remarks on Monday while releasing the Panel of Experts Report on policing and crowd management of the SAPS.

The panel was appointed by Cabinet in 2016.

The panel, in its 596-page report, put forward a detailed programme for the professionalisation of the SAPS for reforms in crowd management.

"The tragedy of Marikana is an occurrence that is etched in the minds of all of us, as a nation. More so, for those who lost their fathers, uncles, sons and breadwinners on that fateful day in 2012," said Cele.

The 16 August 2012 event was preceded by the killing of ten people, including two security guards and two police officers.

"This mass shooting of 34 mineworkers has certainly forced the South African Police Service to correct where it went wrong," said the Minister at the briefing held at the Government Communication and Information System (GCIS) head office in Pretoria.

The Marikana Commission of Inquiry, chaired by retired Judge Ian Farlam, looked into the day’s events and presented a report with findings and recommendations.

Steered by the late Judge David Sakelene Vusimuzi Ntshangase, the panel sought to analyse the recommendations in line with the strategic imperatives of the National Development Plan.

The panel’s terms of reference included strategy and policy; public order policing processes and procedures; professionalisation and demilitarisation of the police; and accountability and transparency in all SAPS operations.

In its report, the panel put forward a detailed programme for the professionalisation of SAPS for reforms in crowd management.

"The review of the SAPS code of conduct; issues of discipline; training and recruitment as well as competency are also contained in the panel’s findings. The panel sought to give advice on the approaches and possible policy interventions in this regard," said Cele.

The Minister assured South Africans that accountability was in motion, with police members involved in the Marikana tragedy being criminally prosecuted.

"To date, the SAPS has paid out over R176 million compensate the families of those killed in the Marikana tragedy. R18 million-rand worth of civil claims to yet to be finalised. The process to finalise other categories of compensation are ongoing," said the Minister.

Cele added that Cabinet had directed that the issue of the families of those killed on that fateful day be looked at.

The Marikana Commission called on the SAPS to address the systematic problems relating to governance, leadership and accountability.

In this regard, the Minister said legislative reforms had commenced.

"The bulk of the recommendations are to be realised in the short to medium term as they are incorporated into the SAPS Act Amendment Bill," he said, adding that the bill had already gone through a round of public comments.

These inputs are being finalised before the bill is tabled in Parliament.

"The Bill gives the assurance that no automatic rifles may be used in crowd control management. It will also address matters of vetting and integrity testing for those employed under the SAPS Act, including municipal police," said Cele.

Those joining the service will also need to be subjected to processes that ensure the integrity of the organisation is maintained. He said the Civilian Secretariat for the Police Service will monitor the implementation of the recommendations and provide regular progress reports.

Among the matters raised by the Commission was the de-militarisation of the SAPS.

Cele said the Civilian Secretariat’s research studies had established that the SAPS Visible Policing units were not militarised.

There were, however, sections within the SAPS that are paramilitary by virtue of the crimes they have to deal with. These included the Tactical Response Team (TRT), National Intervention Unit (NIU) and Special Task Force. This was due to the units using specialised techniques to deal with serious and violent crimes.

"Overall, the professionalisation of the SAPS is being realised through ongoing internal training courses. These are earmarked for officers at every section of the SAPS to understand the law as well as the rights of the people they serve, "he said.

Over and above that, the police recruitment process continues to attract professional graduates.

"SAPS is now employer of choice for graduates of law, criminology, forensics and other policing related degrees. Attracting the best will bolster policing and better serve South Africans," he said.

Another recommendation was that the Ministry continues to work towards beefing up the staffing and resourcing of the Independent Police Investigative Directorate.

Cele said it was crucial for IPID to remain responsive in its mandate.

"It also must have the freedom to build strong capacity and remain an effective impartial oversight body of the SAPS," said the Minister.

The Ministry remains fully committed to capacitating and resourcing the Directorate to ensure it functions effectively and is supported in maintaining its independence.

On public order policing (POP) units, interventions such as the equipping of the units were already in place.

"POP units are better resourced today than they have ever been before. Nearly R598 million has been spent toward resourcing and capacitating of the POP units."

The units are equipped with two–way radios, loud hailers, video cameras and PA systems for ease of communication during operations. Beyond this, 6 324 officers have been trained through numerous courses and found competent in proper crowd management.

Officers in the unit have also been trained on the use of specialised equipment such as water cannons and stun grenades.

In addition, all POP officers are trained in first aid and each vehicle used for the unit’s operations is equipped with first aid kits as per the Expert Panel’s recommendations.

One of the sharpest criticisms of the SAPS by the Marikana Commission was the lack of transparency on the events 16 August 2012.

One recommendation was to encourage the video recording of protests, public unrest and other mass gatherings by the police.

Cele said this had now become a standard operating procedure in the SAPS.

"In this regard, hundreds of professional video cameras, external hard-drives as well as voice recorders and stills cameras have been secured for this purpose," he said.

Twitter
More in this category: « Traffic officers to be kitted out with bodycams to curb bribery. Bushiri wins bid to have South Africa's accusers testify in Malawi court. »
back to top