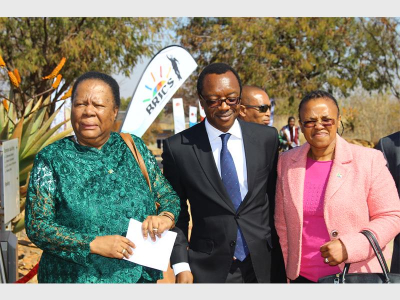 President Cyril Ramaphosa has in terms of Section 84 of the Constitution appointed long-serving public sector executive Phindile Baleni as Director-General of The Presidency and Secretary of Cabinet.

In the context of the COVID-19 pandemic and South Africa’s pursuit of economic reconstruction and recovery, the appointment of the Director-General is vital to the functioning and impact of The Presidency at the apex of the system of government.

The Presidency coordinates the development and implementation of government policy and engages in partnerships with all sectors of society and international stakeholders in pursuit of South Africa’s development objectives.

Baleni, who joined the leadership echelon of the public service in 1994, is being transferred to The Presidency from the Office of the Premier in the Gauteng Provincial Government where she has served as Director-General since 2015.

Baleni succeeds Dr Cassius Lubisi who retired in September 2020 after a decade as Director-General in The Presidency and Secretary of Cabinet.

Baleni is an admitted attorney and conveyancer who holds a B. Proc and an LLB from the University of the Witwatersrand.

She was appointed legal advisor to the then Gauteng MEC for Housing and Local Government from 1994 to 1996.

In 1996, she joined the City of Johannesburg where she played a strategic role in strategic planning, high-level project management and the development of local-government policy.

Baleni later joined Electricity Distribution Industry (EDI) Holdings as Chief Executive Officer and was instrumental in the establishment of regional electricity distributors (REDs) in the country.

In April 2011, Baleni was appointed as the Chief Executive Officer of the National Energy Regulator of South Africa (NERSA), a position she held until she became Director-General in the Office of the Premier in Gauteng.

She has served on the boards of the Manufacturing, Engineering and Related Services SETA (MERSETA), the CSIR as well as the Council of Wits University.

Ramaphosa has wished Baleni well in her new position and has expressed his appreciation to Lusanda Mxenge who has been Acting Director-General of The Presidency for several months.

Twitter
More in this category: « Dlamini-Zuma publish new lockdown rules over the Easter period. Jubilee District Hospital revamped to better service to the public. »
back to top