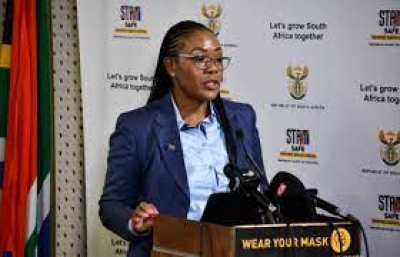 Auditor General (AG) of South Africa, Tsakani Maluleke, has expressed concern over the financial health of departments as unauthorised expenditure increased in the 2019-2020 financial year.

"The financial health of departments continued to be alarming. Unauthorised expenditure, which is mainly as a result of overspending of the budget, increased from R1.65 billion to R18.12 billion – of which R15.13 billion was as a result of the early payment of the April 2020 social grants in response to the COVID-19 lockdown measures, "Maluleke said.

Addressing a media briefing on Wednesday on the audit outcomes for national and provincial departments, she said the remaining R2.99 billion was overspending by 21 departments.

"Over a third of departments ended the year in a deficit totalling R21.2 billion. In addition, over 60% of the departments had insufficient funds to settle all liabilities that existed at year-end if the unpaid expenses at year-end (totalling R22.78 billion) were also taken into account," the AG said.

This means that these departments started the 2020-21 financial year with part of their budget effectively pre-spent – 27 departments will have to use more than 10% of their 2020-21 operational budget (excluding employee cost and transfers) to fund the shortfall.

"Departments do not budget for such claims, which means that all successful claims will be paid from funds earmarked for other strategic priorities, including the delivery of services, further eroding the ability of these departments to be financially sustainable.

"Their combined deficit for the year was R64.95 billion, of which 92% related to the Road Accident Fund. A total of 21 public entities disclosed uncertainty about whether they will be able to continue as a going concern.

"Many of them are key development and delivery entities that have been disclosing their vulnerable financial position for many years, including the Road Accident Fund, the South African National Roads Agency, the Property Management Trading Entity and a number of provincial public entities," the AG said.

The financial statements of 17 public entities were not reliable enough for financial analysis – these included seven technical and vocational education and training colleges, the Passenger Rail Agency of South Africa and four provincial public entities in North West.

"Even though most public entities would be able to continue their operations through obtaining funding (loans, grants and overdrafts), delaying creditor payments, cutting costs and reprioritising projects, these negative indicators raise concerns about their financial viability.

"Government cannot afford to lose money because of poor decision-making, neglect or inefficiencies. However, we continued to see a rise in fruitless and wasteful expenditure, with 231 auditees losing R2.39 billion in the current year, of which R0.37 billion was to pay penalties and interest as a result of late payment to creditors," Maluleke said.

Over the last three years, R7.44 billion of government expenditure was fruitless and wasteful.

"Often findings on non-compliance with supply chain management legislation are viewed and commented on as procedural issues or possible fraud. But the potential for losses to government due to the correct processes not being followed is often overlooked," the AG said.

Two-thirds of departments and 44% of public entities did not comply with supply chain management legislation, resulting in unfair or uncompetitive procurement processes.

"Most often this means that not all potential suppliers were given a fair chance to compete for work. Less competition often leads to higher prices being paid for goods and services.

"There were 42% of departments and 21% of public entities that did not comply with legislation on contract management, such as monitoring the performance of suppliers in accordance with contracts – this also often results in financial loss," Maluleke said.

The AG said state-owned entities are in serious financial difficulty.

Many state-owned entities disclosed uncertainty in their financial statements about whether they will be able to continue as a going concern.

Twitter
More in this category: « 'Signs of improvement' in government audits but no reason to celebrate - AG. SCA declares 2018 ANC Free State conference 'unlawful and unconstitutional'. »
back to top