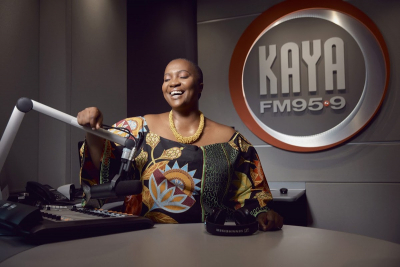 South Africans are opening their hearts and wallets to Dr Sindi van Zyl in her time of need, including retailer Woolworths, which donated R100 000 to help pay the bills in her Covid-19 battle.

She was diagnosed with Covid-19 at the beginning of the year and admitted to hospital in February due to trouble breathing. Six weeks later, she is still in hospital, the fundraising page stated.

Known as a doctor, radio DJ and researcher who uses social media to share HIV-related, mental health and other medical information, her husband, Marinus van Zyl, has now called on those who have been positively impacted by her to offer whatever they can to cover her bills, which currently sit at around R2 million.

"The cost to the family... alone has already exceeded one million rand and we are running out of funds," said Marinus van Zyl.

"She has suffered several complications related to a long stay in ICU, and we need more funds to pay for her continued stay in hospital until her lungs can cope without the ventilator. We will use any funds raised to pay the hospital bills, to enable Dr Sindi the chance to survive."

Dr Sindi is part of our Woolies family and we want nothing more than to see her back to full health.

Guys let's contribute to supporting Dr @sindivanzyl as she recovers from #COVID19. Dr Sindi has helped so many people over the years, it's our turn to help her. #GiftSindiLife

Dr Sindi is one of the most important person I know - kind, generous and selfless. She loves deep and shows up for everyone. Lets keep her and her family in prayers and donate. ??❤️ #GiftSindiLife WE LOVE YOU @sindivanzyl https://t.co/GbX4YblpfY pic.twitter.com/sUP6VmR3hT

By 5pm today, over R520 000 had been raised towards the R2 million target. Funds donated will go through the Van Zyl family trust called Khaya.

Twitter
More in this category: « SANDF to evacuate South Africans stranded in Mozambique. Operation Paseka continues accross the country to ensure safety over Easter weekend. »
back to top