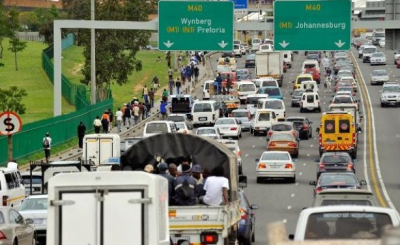 The Provincial Commissioner of the South African Police Service in Limpopo, Lieutenant General Nneke Ledwaba joined the Deputy Minister of Transport Me.Dikeledi Magadzi and the Limpopo MEC for Transport and Community Safety Me.Mavhungu Lerule-Ramakhanya during Operation Paseka which aimed to reduce the road fatalities along the roads as the citizens are making their ways to their respective destinations.

The operation kick started with the joint parade led by Brigadier Dikeledi Mangena which comprised the following role players: Different Police Units, the Provincial and Municipal Traffic officers, LEDET, YCOP and the Community Police Forum (CPF). Members were encouraged to work smart, hard, diligently and to be cautious not to be vulnerable to COVID-19 virus.

As the traffic was picking up along the N1 North, the road block was already up and running with the sole aim of checking any illigal activities in transit, unroadworthy vehicles and drunken driving. Motor vehicles, drivers and commuters were searched and tested.

The operation have culminated into parallel and simultaneous processes when the Saps members were deployed back to their respective policing precincts and continued with visibility and patrols. Members of LEDET visited nine (09) liquor outlets to check compliance in and around the Waterburg District.

Whereas, operation "Vhuthu Hawe" was also underway in the Musina policing area of the Vhembe District led by Brigadier Malahlela through various ways including a roadblock at the Baobab tollgate Plaza and the intensive patrols in the Musina CBD whereby the following successes were attained:

98 x people were arrested for the contravention of the Immigration Act. Police confiscated the following items during the operation: 1 x fraudulent birth certificate, and R3 200.00 cash of money. The following activities were conducted : 367 x people were searched, 222 x motor vehicles were stopped and searched, 02 x motor vehicles were impounded and 14 x summons for the contravention of the Road Traffic Act were issued to the value of R11 050-00.

In the Western Cape, the Traffic Department's Jandre Bakker said they were monitoring most of the province's main routes.

"The main routes in the province carry the most traffic. These are the N7, R27 on the West Coast, the N1, which is a main route to the Free State and Gauteng and also the N2 which is the main route the Eastern Cape."

Twitter
More in this category: « South Africans open their hearts to help beloved Dr Sindi in Covid-19 battle. Total pulls staff from natural gas site in Mozambique amid attacks - Report. »
back to top