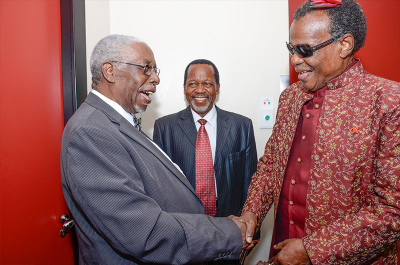 The first Premier of KwaZulu-Natal, Frank Mdlalose, has died at the age of 89.

The news was confirmed by Mdlalose’s political home, the Inkatha Freedom Party (IFP) on Saturday night.

Mdlolose became the premier of the KwaZulu-Natal government after the ANC won the country’s first democratic elections in 1994.

"It is with deep sadness that the IFP announces the passing of our former National Chairperson, Dr Frank Mdlalose, who has succumbed to Covid-19 We extend our condolences to his daughter, Ms Makhosazana Mdlalose, and to his wife who is currently in hospital fighting this virus. We pray for her and we wish her strength, "said the party in a statement.

Described as an outstanding servant of South Africa, Mdlalose has served in the former KwaZulu government as the Minister of the Interior and then Minister of Health.

"During the constitutional negotiations, he became one of the IFP’s main negotiators, and was our country’s champion for federalism and the creation of provinces. When South Africa achieved democracy in 1994 and the electorate placed KwaZulu-Natal under the governance of the IFP, we appointed Dr Mdlalose as the first Premier of the Province," added the IFP.

He relinquished his premiership and IFP national chairperson position due to ill health, handing the premiership baton over to Dr Ben Ngubane who later joined the ANC.

The party has extended condolences to his daughter, and his wife who is currently in hospital fighting the virus.

Meanwhile Former IFP president Mangosuthu Buthelezi has paid tribute saying Mdlalose was one of the IFP’s main negotiators at CODESA,  the talks that ushered in a democratic dispensation.

Amid political violence between the ANC and IFP, Mdlalose and the ANC’s Jacob Zuma formed a peace foundation in 1991.

Buthelezi says he is proud to have served alongside a leader of Mdlalose’s calibre.

KZN Premier Sihle Zikalala also said Government of KwaZulu-Natal mourn the passing of this giant leader of the people of our province.

"It is with the greatest sadness and an immense sense of loss that we have learnt of the news of the passing of the first democratically elected Premier of KwaZulu-Natal."