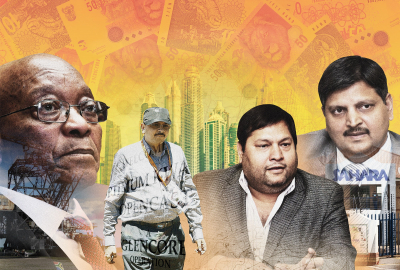 Former President Jacob Zuma accused the ANC's top six of conspiring to see him behind bars during their meeting held virtually last month.

He further slammed the officials who sought to convince him to appear before the state capture commission - telling them that their visit was for a public show and under false pretence.

On Sunday, a 23 page document of speaking notes, based on the two hour long meeting was released on social media. It was on a letter head bearing the name of Jacob Gedleyihlekisa Zuma dated March 28 and addressed to the secretary general of the ANC.

The meeting was meant to convince Zuma to change his mind about his refusal to appear before the Zondo commission. His first and last appearance at the inquiry was in 2019.

Zuma met the top six in early March and had reportedly spoken for two hours. The meeting notes run into 23 pages.

He begins by explaining the history of the South African Constitution and explains how the vision for the country's democracy was.

Zuma then explained why he believed the judiciary had begun to sway away from its founding vision.

The former president said he was disappointed that the ANC top six was approaching him for a meeting under what he believes were false pretences. Zuma said the actual purpose of the meeting was a public showing meant to please outside forces.

"It (meeting) takes place when I have been left dry and without much-needed support from you. I can't help but feel that the urgency of this meeting is not only concerned about my interests and welfare but a response to external interests," he said.

Zuma said he had the right to criticise the judiciary and explained that he would not be appearing at the state capture commission because it lacks independence.

"I am entitled in terms of the Constitution of the Republic of South Africa to hold and express views, opinions and beliefs about the judiciary.

"I am entitled to freedom of conscience and it is my right to conscience that I refuse to participate in the judicial process that appears to lack the attributes of independence," Zuma said.

Zuma said he had never enjoyed freedom since 1994 and all his problems started after he took government office.

He listed the arms deal case, the NPA's 2003 charges against, the rape trial he faced and the allegations he aided the Guptas in corrupt deals - as proof that he had been subjected to unfair allegations.

Zuma told the top six that they had looked away as he faced the allegations of corruption and about the "nine wasted years" of his presidency.

"My own comrades worked to oust me as president and even worked with the opposition to remove an ANC president from Parliament -something that was unprecedented.

"In more recent years, the ANC has never protected me as I faced unjustified attacks that I assisted the Guptas to capture the State. You know very well that is not true, but you left the narrative run along," Zuma said.

The former president also highlighted that he had been left to finance his own legal cases as President Cyril Ramaphosa had revoked the State's obligations to finance his legal fees.

He also called out the party for stopping his supporters, who are members of the ANC, from supporting him while he appeared in court.

Zuma told the ANC leadership that he was willing to go to jail instead of being part of the state capture commission.

Twitter
More in this category: « Covid-19 Daily Update: SA records 1 240 new Covid-19 cases with 33 related deaths. At least 76 killed by the tropical cyclone in Indonesia. »
back to top