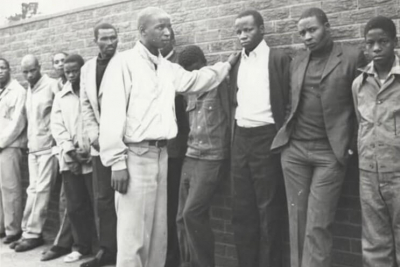 The ANC is commemorating the life and times of struggle activist Solomon Kalushi Mahlangu.

He was convicted of common-purpose murder under the apartheid government and hanged in 1979.

Tuesday's commemoration will include a visit to Kgosi Mampuru Correctional Centre in Tshwane.

While the tombstone of struggle icon Mahlangu represents a powerful stature of assertion with beautiful wreaths, the Solomon Mahlangu Square at the entrance to Mamelodi, in contrast, portrays dark shadows.

The Solomon Mahlangu Square, with its imposing bronze statue mounted on a large pedestal in the centre of a circular paved area, continues to be in shambles.

Surrounding fences have been stripped, and litter is scattered everywhere.

There is broken glass and decaying fruit strewn about, while the stench of urine and human faeces hangs in the air over the site.

Poor maintenance of the site leaves many questions about the memory of the late uMkhonto we Sizwe soldier Solomon Kalushi Mahlangu.

In 2015, the City Tshwane pent R49 million to refurbish the site, but it remains in a derelict state today.

Minister of Sports, Arts and Culture Nathi Mthethwa said the youth should know more about Mahlangu and didn't want to comment on the square's state, saying it was local government duty.

"This day is not about mourning the fact that a criminal regime hung Solomon Mahlangu for his efforts towards a just and humane society. It is about celebrating a life that was dedicated to freedom and the construction of a national democratic society," Mthethwa said

The Mahlangu family attended the event and premiers, ministers, and MK veterans were also there.

Twitter
More in this category: « Government wants the country to move to gas to beat load shedding. Unions gear up for wage battle as they threaten to embark on mass action. »
back to top