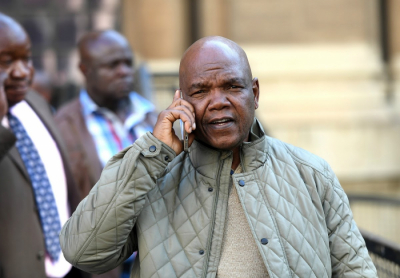 Former crime intelligence boss Richard Mdluli has failed in his bid to have the Gauteng High Court, Pretoria judge Bert Bam recused from further presiding over any matter relating to his criminal trial.

His advocate, Ike Motloung had made it clear he and Mdluli were of the opinion Judge Bam was biased and Mdluli would not get a fair hearing.

While it is unlikely Judge Bam will preside over Mdluli’s fraud and corruption trial, he is due to hear a preliminary application by the State to bar Mdluli from creating further delays in the matter and to ensure he joined his co-accused for the matter to be heard later this year.

Judge Bam is retiring and not likely to deal with the main trial, but Motloung also tried to prevent the judge from hearing the preliminary application brought by the prosecution.

In an argument which at times turned heated, the advocate raised two main objections to Judge Bam, further dealing with the matter involving Mdluli.

He objected to the fact the judge allowed the media to record and film the court proceedings. In this regard, Motloung said the judge gave the green light to the media, without even hearing Mdluli’s objections.

The judge said he had previously issued a directive that the media were allowed to film proceedings in his court, subject to certain limitations such as recording witnesses while they testified.

Mdluli’s second objection was the fact the judge had issued a warrant for his arrest as he did not appear in court on a few occasions prior to the last occasion on March 26.

The advocate said the warrant was flawed as the judge did not apply his mind correctly when he issued it.

He argued Mdluli had valid reasons for not appearing in court, as he was ill. He said while the judge was informed Mdluli was not well, he never pursued this matter further, as he should have, before he issued the warrant.

The argument between the judge and advocate at times became heated, with Motloung on several occasions asking the judge to have patience with him in presenting the argument and the judge telling him not to repeat himself, but to "get on with things".

In turning down the application to recuse himself, the judge said he will later give his reasons. He, however, did say the application "bordered on being mala fide" (brought in bad faith).

Twitter
More in this category: « South Africa signs Pfizer deal in boost to vaccination roll out. Motorists to pay R313 tax every time they fill up with petrol from tomorrow. »
back to top