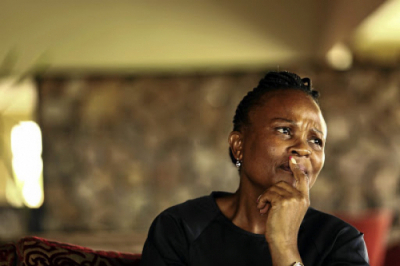 The judges ordered that Mkhwebane, who has been criticised in various court judgments for her lack of independence and understanding of the law, pay the costs of the application including that of two counsel. They found that there were no reasonable prospects of an appeal against the judgment.

Mkhwebane and the office of the public protector launched an application for leave to appeal the judgment — except for orders favourable to them.

At the same time, Gordhan and Pillay launched their own application to cross-appeal the judgment and order where the court had found against them. They were also unsuccessful with their application as the court dismissed it on Wednesday.

"We are satisfied all the issues raised in these applications for leave to appeal and cross-appeal were fully covered and considered in the judgment. We are therefore of the view there are no reasonable prospects of success in another court," the full bench of judges said.

Put differently, we hold the view there is no prospect that another court may come to a different conclusion in this case. Therefore, the application for leave to appeal and cross-appeal the judgment fall to be dismissed."

Gordhan was finance minister at the time. In her report, Mkhwebane recommended President Cyril Ramaphosa take disciplinary action against Gordhan. Mkhwebane’s investigation was prompted by an anonymous complainant.

Mkhwebane’s report, findings and remedial action was also declared unlawful and invalid and reviewed and set it aside.

Gordhan, who denied any wrongdoing, did not take it lying down and took legal action last year to have the report overturned. Pillay and former Sars commissioner Oupa Magashule then joined Gordhan in the litigation against Mkhwebane.

The judges said leave to appeal is only granted where the appeal has reasonable prospects of success or when there are compelling reasons for it to be heard.

Twitter
More in this category: « There’s a shortage of more than 24,000 teachers in South Africa. Struggle icon Charlotte Maxeke remembered as an outstanding leader. »
back to top