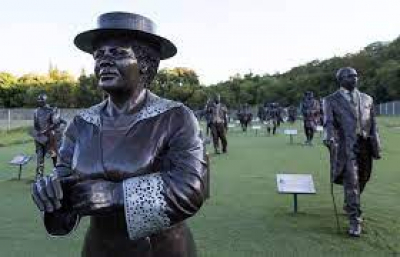 President Cyril Ramaphosa has committed to establishing a Charlotte Maxeke Memorial College in the Eastern Cape as he honoured the political and social stalwart at her 150th birthday celebrations in Fort Beaufort.

Members of the ANC led the celebrations of 150 years of Charlotte Mannya Maxeke across the country.

The ANC also declared 2021 as "The Year of Unity, Renewal and Reconstruction in the Year of Charlotte Maxeke".

Addressing a congregation in Nxukhwebe, Fort Beaufort in the Eastern Cape, Ramaphosa said visiting her homeland "feels like I have come to the fountain of wisdom".

He honoured Maxeke as a religious leader and social and political activist who was the first black woman to graduate with a university degree in South Africa with a BSc from Wilberforce University Ohio in 1901.

She was also the first black African woman to graduate from an American university.

"She led the education project in our country.

"She was an educated person, an intellectual and we need to have a Charlotte Maxeke Memorial College here in the Eastern Cape.

"I support and will work with the Department of Higher Education and other departments to make sure this happens.

"I can’t think of a better place to have a place of education in her memory to get everyone in this area and the country to be able to rise, "Ramaphosa said.

It was also during this visit that the Charlotte Maxeke Agricultural Legacy Project was handed over.

Ramaphosa has also vowed to crack down on corruption, saying those caught stealing will be dealt with.

His tough corruption stance comes as the ANC is deeply divided over the 2017 elective conference's step-aside resolution.

Those facing criminal charges such as ANC secretary-general Ace Magashule were given 30 days by the national executive committee (NEC) to step aside or face suspension.

Ramaphosa was accompanied by some ANC leaders who were instrumental in his win over Dlamini-Zuma in 2017, including Eastern Cape chair and premier Oscar Mabuyane, ministers Stella Ndabeni-Abrahams and Ronald Lamola, and deputy minister Zizi Kodwa.