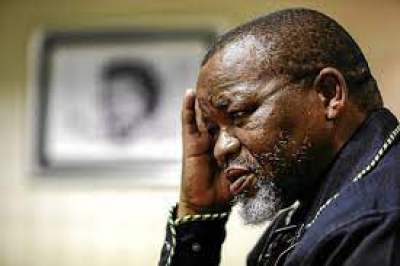 Mantashe appeared before commission chairperson Deputy Chief Justice Raymond Zondo to give parliamentary oversight-related evidence in his capacity as the national chairperson and former secretary-general of the ANC.

During the proceedings on Wednesday, evidence leader Alec Freund told the commission that ANC secretary-general Ace Magashule was scheduled to appear before the commission. However, the ANC sent Mantashe instead.

Mantashe said he had submitted an affidavit that detailed how the ANC performed its functions including its policies, how the party elects its president and parliamentary oversight accountability model.

The minister defended the ANC’s deployment policy, saying the party does not have a "cadre deployment", which has come under fire from the DA.

"I address the issue of cadre deployment in my affidavit for two further reasons: to give the commission an appreciation of the genesis of the ANC policy development and deployment so that it can evaluate and pronounce on the validity of the request made by the leader of the opposition, Mr John Steenhuisen, on the third of February 2021 that the state capture commission should tackle and end the ANC policy of cadre deployment," he said.

He further said the deployment committee did not make appointments but instead it just made recommendations.

Last month, the DA submitted a Promotion of Access to Information (PAIA) application to President Cyril Ramaphosa in order to obtain records of the ANC’s "cadre deployment" programme.

Mantashe also told the commission that he never saw a judge who had to account to Luthuli House, which is the ANC’s headquarters located in Johannesburg, in his 10 years as secretary-general.

He said the ANC understood the separation of powers and did not interfere or tamper with it.

"The root of the matter is that judges are not born judges. They go through a particular career development, until at the apex of that process, they become judges.

"And the reason I’m saying when I was secretary-general for 10 years, I’ve never seen a queue of judges accounting to me. I can’t remember a day where I had a discussion with a judge, on anything.

"I may be a client of a judge, for my sins in society, that’s it. But I have never seen judges come to Luthuli House to account, because one of the things that the ANC appreciates and understands is the separation of powers. We respect that. We don’t tamper with judges. We don’t get into that space.

But there’s nothing that stops us to say 'Advocate X, don’t you think you have been practising long enough to be a judge? Apply'. Because there are these vacancies that have emerged in the various courts, please go and apply, because you have gone through this process," he said.

The matter comes a day after Chief Justice Mogoeng Mogoeng revealed that Minister of Public Enterprises Pravin Gordhan had approached him to ask how "his close friend" Judge Dhaya Pillay had fared, after she had just finished an interview for a vacancy on the Supreme Court of Appeal (SCA).

Twitter
More in this category: « Lieutenant-General Rudzani Maphwanya announced as new Chief of the SANDF. Non-refundable downpayments among onerous vaccine terms - Mkhize. »
back to top