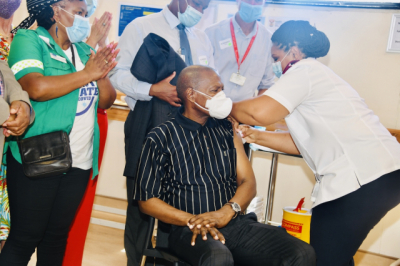 The country worst-hit by the pandemic on the African continent in terms of coronavirus infections and deaths is counting on the single-dose J&J and double-shot Pfizer vaccines to ramp up immunisations after a slow start. It has signed deals with the two firms for a combined 61 million doses, enough to vaccinate 46 million people out of its population of 60 million.

"As government we have found ourselves in a precarious position of having to choose between saving our citizens’ lives and risking putting the country’s assets into private companies’ hands, "Mkhize told a parliamentary committee about vaccine negotiations, adding procurement efforts were now largely concluded.

Mkhize did not give a value for the non-refundable payments, which are in the spotlight after South Africa paused use of the J&J vaccine on Tuesday to investigate a potential link to rare blood clots - following the lead of U.S. regulators.

Mkhize reiterated the pause was likely to be short-lived.

J&J and Pfizer did not immediately respond to requests for comment.

Mkhize said Pfizer initially wanted "sole discretion to determine additional terms and guarantees for us to fulfil indemnity obligations" but had backed down after "intense negotiations".

He said J&J was holding out for a letter from the trade minister expressing support for its investment in local pharmaceutical company Aspen, which will be making J&J doses under licence.

South Africa is setting up a no-fault compensation fund to indemnify the manufacturers against third-party claims, Mkhize continued.

Regulator SAHPRA said on Wednesday it had found no major safety concerns with the J&J shot after reviewing data from the research study that started in February. It said further data were being obtained from J&J and the U.S. Food and Drug Administration and that reviewing that could take a few days.

Mkhize said South Africa was paying $10 per dose for the J&J and Pfizer vaccines and talks were continuing over Russian and Chinese shots.

The cumulative recoveries today stand at 1 486 873, representing a recovery rate of 95%.

Twitter
More in this category: « 'We dont appoint judges,we only recommend' - Gwede Mantashe. Australia to withdraw 80 remaining troops from Afghanistan. »
back to top