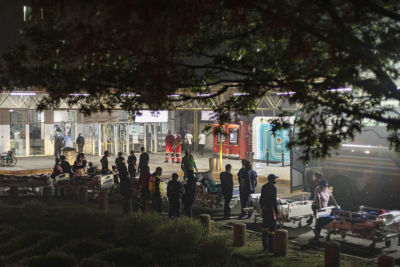 A fire broke out at the Charlotte Maxeke Academic Hospital in Johannesburg on Friday, 16 April 2021. Picture: Twitter/@GautengHealth.

The Gauteng health department said details about the relocation of patients who have been evacuated from the Charlotte Maxeke Hospital would be revealed in due course.

The department in collaboration with emergency services have been evacuating patients at the hospital following an all-night raging fire.

Our firefighters have been receiving help from others in neighboring municipalities. It has been a tedious process trying to move patients. At first, we moved them to wards that were far away from the fire but we started to evacuate them," Gauteng health spokeswoman Kwara Kekana said.

"That is still a process that is ongoing, we are now referring all patients to other hospitals, "said Kekana.

The fire broke out on Friday after a storeroom for medical supplies caught fire at around 11:30 in the morning but was contained by the afternoon.

The City of Johannesburg Emergency Services (EMS) spokesperson Synock Matobako said on Saturday morning that the structural integrity of the Charlotte Maxeke Academic Hospital has been compromised after the fire broke out on Friday.

There are no casualties reported, but three firefighters collapsed as they battled the blaze.

"We have actually managed to contain the fire not to spread to other areas although its a very difficult situation because the structural integrity of the building has been compromised, said Matobako.

"Around 5 o’clock this morning the floor above the medical supply storeroom caved in and collapsed so the firefighting that you see happening is that firefighters are not inside the building they are dealing with the fire outside we have contained the fire at the moment not to spread to other areas."

"We had three firefighter collapsing from exhaustion but they since recovered, because they have been here for quite long and obvious they are exhausted and the extent of the heat is so extreme that some firefighters had their helmets burnt."

Matobako said that the extent of the damage is still unknown, and that a specialist has been called to asses the structure of the building to determine if it is safe to go inside to fight the blaze.

Gauteng Premier David Makhura visited the facility on Saturday morning, as patients at the facility are being moved to other healthcare institutions due to concerns of smoke contamination and safety precaution.

Makhura announced that the Charlotte Maxeke Academic Hospital has temporarily shut down due to damage caused by fire.

The fire broke out on Friday at the hospital’s special dispensary stores and was eventually contained, but reignited in the evening.

Updates to follow as more information is made available.

Twitter
More in this category: « Tension manifesting itself in spats between government & J&J,Pfizer Inc. Steenhuisen says claims that Mazzone lied about her qualifications is fake news. »
back to top