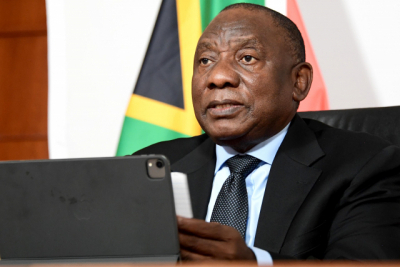 President Cyril Ramaphosa says recent media reports of a complaint of corruption against him that has been reportedly been made at the Sandton police station are false.

This after it was alleged that the Free State Department of Education gave his former company  a "dubious tender" for the construction of a school.

According to the paper Reserve Bank shareholder Fanie Fondse opened criminal charges against him at the Sandton Police station on Tuesday.

Fondse, 62, flanked by four people who claimed to be witnesses, carried two briefcases of documents said to be incriminating the president in corruption related to Shanduka, a company that Ramaphosa was a shareholder in.

In 2015, while the ANC’s deputy president, Ramaphosa allegedly "persuaded" the Free State Department of Education to give Shanduka a contract to build schools in the Free State.

The tender was not advertised and no bidding process was administered. Two schools were build by Shanduka in one year.

"While the newspaper report is not clear on the details of the complaint, the report contains glaring inaccuracies and a clear misrepresentation of facts," said Ramaphosa on Saturday.

He said Shanduka Group never received a tender for the construction of any schools in the Free State.

The company has never operated in the construction industry, he said.

The President further placed on record that:

Statement on allegations contained in The Star newspaper https://t.co/vjaa5P33Bm

The group also opened a case of racketeering, money laundering and treason against Ramaphosa, accusing him of colluding with apartheid leaders in looting money from the South African government.