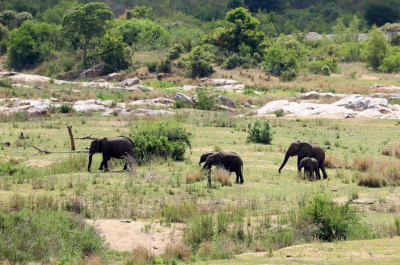 A suspected poacher has been found dead and his accomplice arrested while trying to flee from rangers in the Kruger National Park on Saturday.

According to spokesperson Isaac Phaahla, field rangers were out on a routine patrol at the Phabeni area when they detected incoming spoor and made a follow-up in pursuit of the suspects.

"Three individuals were spotted by the rangers and attempted to run away, but rangers requested back-up from the Airwing and K9 unit," said Phaahla.

"When they realised they had been spotted, the suspected poachers dropped an axe and a bag with their provisions in an attempt to escape from the rangers. One of the suspects was arrested following assistance from the Airwing and K9 unit."

The suspect told the rangers the group had run into a herd of elephants and was not sure if his accomplices made it.

Upon investigation, the rangers discovered one of the suspect’s accomplices badly trampled. He was declared dead on the scene. The third suspect managed to escape with an eye injury.

"A rifle was recovered and the case was referred to police, whom together with the pathology team attended to the scene."

Managing Executive of the Kruger National Park Gareth Coleman congratulated all those involved in the arrests.

"We are proud of the teamwork and dedication of our Rangers Corp, our aviators and the K9 unit. It is unfortunate that a life was unnecessarily lost. Only through discipline, teamwork and tenacity will we be able help stem the tide of rhino poaching in KNP," said Coleman.

Twitter
More in this category: « Covid-19 Daily Update: SA records 1089 new cases with 25 related deaths. ANC chief whip ready 'to subject herself' to probe over son’s involvement in a PPE deal. »
back to top