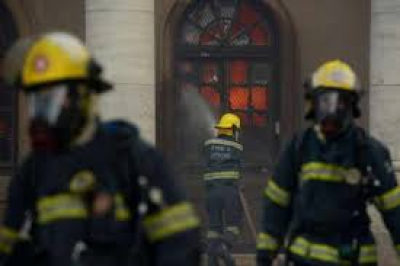 At least four firefighters have been injured while battling a runaway veld fire in Cape Town that started on Sunday morning.

While the cause of the fire was still unclear, several structures including parts of the Rhodes Memorial Restaurant and a library at the University of Cape Town (UCT) have been destroyed, according to the City of Cape Town’s Disaster Risk Management.

The fire spreaded to UCT’s upper and middle campus prompting the evacuation of all students.

"Yesterday, the city assisted approximately 3,000 UCT students that were living on the campus and also in the roadside area to evacuate as a precautionary measure," said Charlotte Powell, the spokesperson for Disaster Risk Management.

"The firefighting team has been out all night trying to prevent this [properties from catching fire]and I’ve just confirmed earlier this morning [Monday] with the firefighting team at this stage there is no property in danger, however, the fire is still not under control".

Fire authorities and members of the University of Cape Town (UCT) executive will begin to assess the damage done to the nation's oldest university following a massive fire.

Residents in two streets in Vredehoek have also been evacuated as a precautionary measure and there is currently no danger to property.

Residents have been asked to be cautious.

Close all windows and doors to prevent drafts and reduce heat. Should there be an immediate threat to your property, damp down your garden using a hose or irrigation system," Powell said.

The non-profit organisation, Gift of the Givers, donated food and beverage items to UCT students affected by the fire at various accomodation sites after they were evacuated.

Meanwhile, a man is in custody on suspicion of starting one of the fires that's still raging on the slopes of Table Mountain.

Cape Town mayoral committee member for safety and security JP Smith confirmed Monday morning a suspect in his 30s was taken into custody on Sunday night at Devil’s Peak.

"He was spotted by a resident who tracked him down with the help of his sons and the family’s dogs," Smith said in a statement.

He added the matter was with Saps for investigation.

Twitter
More in this category: « Government outlines how the plan to deal with injury claims from Covid vaccines work. Livestream: NA Speaker Thandi Modise testifies before State Capture Commission. »
back to top