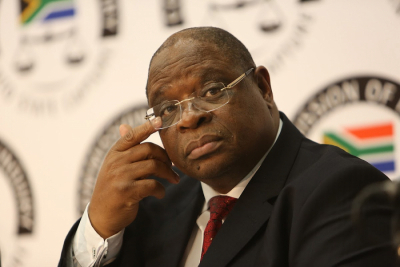 The state capture commission continues on Monday, despite the burglary at its head offices at the weekend.

The Commission will hear testimony from the Speaker of the National Assembly, Thandi Modise, and the National Council of Provinces' Amos Masondo.

The commission is questioning the motive for the break-in at its offices in Parktown, Johannesburg.

It's still trying to ascertain if anything other than a computer and monitor was stolen.

And for this she apologised to the country.

Modise was chairperson of the National Council of Provinces and Baleka Mbete the National Assembly speaker at the time, when several allegations were levelled against the Gupta family.

Evidence leader Alec Freund charged that the parliamentary portfolio committees had "significant powers" whose scope included the ability to subpoena, to compel people to appear before them and have expertise in their own respective domains. Modise agreed.

"I agree that within the powers and responsibilities of parliament, any matter could have been investigated."

Modise was asked why action was not immediately taken on the allegations, even after former deputy minister Mcebisi Jonas publicly claimed to have been offered R600m and a cabined position in 2016 in exchange for being friendly towards the Gupta family. She was unable to respond to this.

The issue had also been discussed at an ANC NEC meeting and former public protector  Thuli Madonsela also released a report into state capture.

Modise added that it was almost impossible to investigate all allegations as some people used them for political gain.