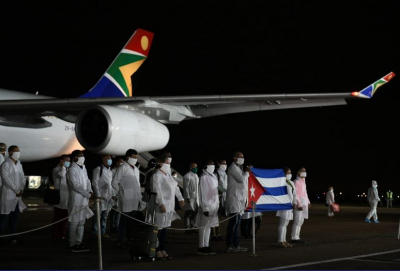 The Department of Water and Sanitation will bring in 24 Cuban engineers to assist with the country’s infrastructure issues and to share expertise.

In a statement on Monday (19 April), the department said that the engineers will be seconded to South Africa to enhance and improve government’s efforts on water delivery and related services.

"The highly qualified Cuban specialists will assist as advisors at provincial and local levels across the country, sharing their vast skills in the areas of mechanical, electrical and civil engineering, as well as project management.

Some of the engineers’ core responsibilities include the practical exploration of sustainable use of water resources, maintenance and management of water supply and sanitation infrastructure, and the strategic planning of those resources, particularly in rural and other disadvantaged communities."

Cyril Ramaphosa’s government faced scrutiny in 2020 after it brought in more than 200 doctors from Cuba are due to arrive in South Africa to help fight coronavirus.

The Cuban doctors – arriving in Johannesburg late on Sunday night – are to be deployed to different provinces by South Africa’s Department of Health,Cuba's ambassador Rodolfo Benítez Verson said.

The two countries have close ties as Cuba was instrumental in the fight against white-minority rule in South Africa, which did not end until 1994 when anti-apartheid leader Nelson Mandela was elected president.

In a March parliamentary debate, International Relations and Cooperation of South Africa minister Dr Naledi Pandor said that South Africa and the Republic of Cuba are bonded by a noble history of freedom struggle.

The current relations between South Africa and Cuba are morally pedigreed as well as embedded within the doctrine of South-South Relations.

"The late great President Mandela acknowledged and extolled the Cuban role in advancing the Agenda of the South during a speech at a banquet in honour of President Fidel Castro of Cuba on the 4 September 1998.

"On this issue of Cuba, South Africa relations and international solidarity Madiba said."

She added the use of Cuban healthcare professions buttressed South Africa’s health system during the height of the Covid-19 pandemic.

Our country has especially benefited from the Cuban expertise and community orientation, which helped in the area of assessing the underlying factors that lead to diseases in communities.

This has gone a long way towards improving South Africa’s primary health care which, the Minister of Health has pointed out, is one of the challenged facts of our health care system.