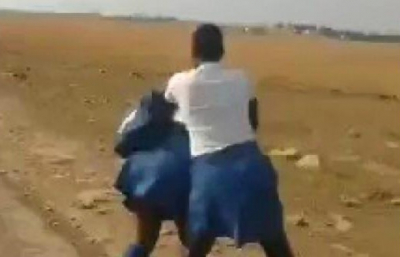 A screenshot from a video of an alleged bullying incident at a KZN school.

The Mahlabathini Magistrates Court in KwaZulu-Natal has slapped a pupil with a community-based sentence of 12 months, after she was convicted of assault with intent to cause grievous bodily harm.

According to the provincial National Prosecuting Authority (NPA), the matter relates to the assault of a fellow learner from Mathole High School in Mahlabathini in September last year.

"The incident was captured on video and widely circulated on social media," the NPA said in a statement on Monday.

According to the judgment, the 26-year-old learner will also be placed under the supervision of a probation officer for the 12-month period and referred for intensive therapy to manage issues that may have led to the offence.

In handing down the sentence, Magistrate Fatima Khawula set out some conditions, which include the accused not leaving the magisterial district without prior written consent from the probation officer and submit a written apology to the victim.

"In addition, the probation officer must facilitate a mediation between the accused and the victim."

The Director of Public Prosecutions in KwaZulu-Natal, Advocate Elaine Zungu welcomed the finalisation of this matter.

"We acknowledge the prevalence of bullying in the school environment. We will give these matters the necessary attention and ensure prosecutions accordingly," she said.

Bullying is back in the spotlight after a Grade 10 learner from Limpopo, Lufuno Mavhungu, was laid to rest over the weekend after she took her own life after being bullied by a fellow pupil.

This comes after the viral video of her being attacked on 12 April 2021, in full view of her peers at Mbilwi Secondary School, made rounds on social media.

The suspect, who is a minor, has since been arrested and is facing a charge of assault.

The teenager made her first court appearance last week.