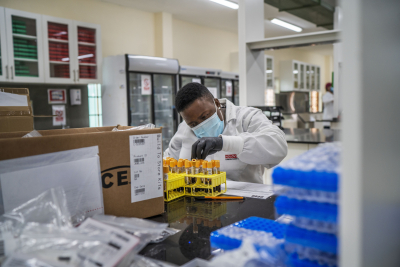 Minister of Health Dr Zweli Mkhize said in a statement the cumulative number of COVID-19 cases for South Africa now stands at 1 568 366.

This is an increase of 853 new cases identified in the last 24 hours.

This brings the total to 53 887 deaths. Some Provinces have been conducting data verification at facilities to ensure that all COVID-19 related deaths that were not reported are reported.

Mkhize added that the cumulative recoveries today stand at 1 494 630, representing a recovery rate of 95%.

Mkhize was speaking during a visit to the closed hospital to assess the extent of damage caused by the blaze on Friday and to discuss a recovery plan.

Makhura visited the hospital on Saturday and said it would remain closed for a week. Patients who needed medication and care were advised to go to nearby hospitals.

Mkhize said on Tuesday the fire had caused significant destruction. He said the fire had started on the dispensary side of the facility.

"We have seen in some areas there has been destruction with the floors caving in. Holes have appeared on different floors. It was a huge fire resulting in a huge amount of destruction," said Mkhize.

The minister said that no patients were injured by the fire. The tally of damage sustained had yet to be determined.