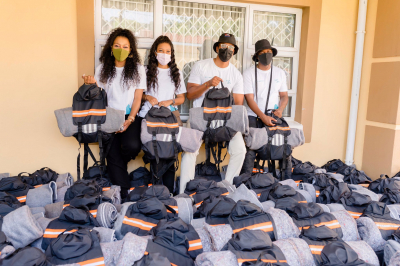 No one envisages for themselves a life of destitution but for more than 11 million South Africans living below the international poverty line this lived reality often feels inescapable, says NS Impact Foundation CEO, Nosipho Fakude.

According to the United Nations (UN) global Human Development Index (HDI), South Africa is struggling to advance human development and approximately 18.9% of the population survives off less than R27.66 a day.

"While the UN report paints a bleak picture, our people have always known how to take care of each other. What is missing is the facilitation of those who can give to those living without. This is at the core of what N.S Impact Foundation does. By uniting the power of those who can give, to help those who need, we can focus charitable efforts to alleviate the number of people facing socio-economic hardships," explains Fakude.

"We chose these four pillars because through them we know we can collectively do the greatest good. We aim to deliver measurable impact in all that we do, helping people not just in the here-and-now but empowering them to realise a brighter future for themselves through bringing together people who can contribute their time, skill, resources or funding, to turn solutions into practice," says Fakude.

He says with the advent of the fourth industrial revolution, one of the most vital skills needed to ensure South Africa does not fall behind and risks losing out in participating in the global economy is the promotion of Science,Technology, Engineering and Mathematics (STEM) education in schools.

But according to the UN’s HDI, the wealthiest 10% of South Africa’s population holds more than half the nation’s income. The poorest 40% of the nation shares just 7.2%, making South Africa one of the most unequal nations in the world and this inequality also extends towards education.

Looking to mitigate this growing trend, the NS Impact Foundation came up with a campaign that equips South African scholars with one of the most necessary tools to become efficient in maths and science, a scientific calculator.

"Through our Add Sum project, we identified 11 schools across Kwa Zulu Natal and Gauteng and donated over 2000 calculators to help students ace their maths and science exams. Because no amount of genius can ever prevail if it is not allowed to do so," explains Fakude.

But the ongoing Add Sum project is not the only dent the foundation is making to bring about social justice. The philanthropic organisation has also endeavoured to bring dignity to one of the most over-looked citizens in society, homeless people through its Fill Up the Bag project.

By partnering up with social agents such as Uzwelo, a skills development and job creation platform that repurposes material destined for landfills into functional bags. The NS Impact Foundation sources and fills the backpacks with materials such as food, sanitary pads and blankets to alleviate the hardships of living on the streets.

"The foundation has handed out more than 200 bags since the inception of the ongoing project and through more donations and volunteers is looking to top up and handout three hundred more bags. It is partnerships, whether at a community, the individual or corporate level that allows us to maximise not only our reach but also our impact because there should not be any obstacles to doing good for others," concludes Fakude.

Twitter
More in this category: « Mchunu calls for solutions to "difficult" wage negotiations as strike action looms. Tshegofatso Pule's WhatsApp messages reveal she was pregnant for the second time. »
back to top