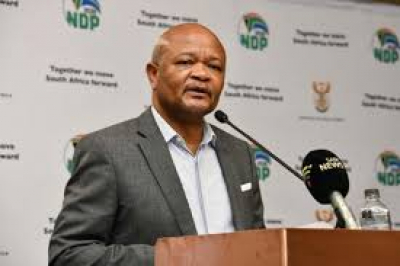 Public Service and Administration minister Senzo Mchunu says that the government has effectively run out of options when it comes to wage hikes, as the country faces worsening financial problems which will push it towards a fiscal cliff.

Briefing media on Thursday (22 April), Mchunu said that government remains committed to collective bargaining with labour unions, but warned that the government’s hands were tied.

"These are the most difficult negotiations between the government and organised labour which the country has ever faced," he said, adding that the main issues around the negotiations included.

Mchunu said that the government is 'investing a lot' into these negotiations and is expecting a lot from the outcome.

"(We) are doing so in good faith and with the utmost transparency under circumstances where National Treasury has unequivocally told the cabinet that the state has no money – each proposal by either of the parties must be taken seriously, holistically and comprehensively."

He added that the government has appointed an independent facilitator to ensure that it succeeds.

"The mandate to him and the team is that they should not take the posture of people who want to win – the country has to win – not government’s team. We need to move away from and avoid separation – there is no ‘us and them’," he said.

While Mchunu has laid bare the desperation of the government’s position, labour unions have already said that they will not accept a 0%-wage increase offer for the 2021/22 financial year.

The Public Servants Association (PSA), which represents more than 235,000 public workers, said that it will embark on strike action that would see key public servants such as doctors and nurses embark on a strike.

Government is expected to respond to the union’s demands with a revised offer on Friday (23 April), after which further action will be determined the union said.

The government’s fiscal strategy over the next three years will be to narrow the deficit and stabilise the debt-to-GDP ratio, Treasury said in its budget on 24 February.

Economists have warned government for years that South Africa has been heading towards a fiscal cliff for a number of years  – primarily because of its wage spending.

Better than expected revenue collection meant that South Africa has managed to pull itself back from the fiscal cliff in its latest budget, but the warning signs are still there, said the Fiscal Cliff Study Group (FCSG).

The fiscal cliff is the point where civil service remuneration, social assistance payments and debt-service costs will absorb all government revenue.

The FCSG said that this neared 100% of estimated tax revenue in the October 2020 MTBPS, but that has clawed back 91% of tax revenue in terms of the February 2021 budget due to a lower than expected shortfall in revenue.

It added that the longer-term outlook for the fiscal cliff barometer remains worrying as it is likely to trend in the wrong (upwards) direction.

To reverse these trends, the study group said that Treasury needs to refrain from helping non-essential failed state-owned enterprises such as Alexkor, Denel, SA Express, and South African Airways.

Twitter
More in this category: « Covid-19 Daily Update: SA records 1413 new cases with 55 related deaths. Ramaphosa urges developed countries not to provide climate change aid in the form of loans. »
back to top