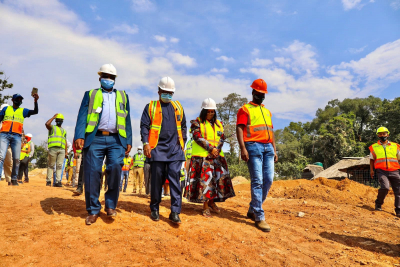 Transport minister Fikile Mbalula says that the N4 Toll Route will see R1.5 billion in major upgrades over the next few years, including lane-widening and new interchanges.

The N4 Toll Route starts at the Solomon Mahlangu off-ramp in Gauteng and ends in Maputo, Mozambique.

It is managed by Trans African Concessions (TRAC) which will be largely responsible for the upgrades, Mbalula said in a a media briefing on Thursday (22 April).

"The N4 Toll Route is the catalyst for trade and investment between three South African land-locked provinces of Gauteng, Limpopo, and Mpumalanga as well as neighbouring countries," he said.

"These three provinces are rich in natural resources, and the corridor links them directly to international markets through the Maputo  Port. The N4 Toll Route also links the City of Johannesburg and Ekurhuleni Metropolitan Municipality to the port."

He outlined the key upgrades in more detail below.

The Belfast-Machado road rehabilitation and upgrade

The extensive upgrade between Belfast and Machadodorp on the N4 Toll Route is progressing well and is 26% complete, said Mbalula.

The R400 million project, which was awarded to WBHO Construction in 2019, is expected to take three years to complete.  Roadworks will include the rehabilitation of a 30km stretch, which will also be upgraded to a four-lane carriageway.

Mbalula said that the upgrade from a two-lane road to a four-lane road will benefit road users in this region in terms of ease of travel, convenience and road safety.

"The improved vertical alignments, consolidation of farm accesses and additional capacity as part of the widening not only makes the N4 safer but also improves the mobility resulting in reduced travel times and travel costs.

"The construction of the Machadodorp (eNtokozweni) interchange is also aimed at improved road safety, but still provides convenient access to the town. Local communities are also directly benefitting from the job creation during construction."

This Mbombela-based project is valued at R390 million and is 50% complete, said Mbalula,

Managed by Raubex, the project will see the existing intersection transformed into a grade-separated interchange, with on- and off-ramps and a bridge that will separate cross-traffic from through-traffic and thus ease traffic flow.

"The upgrading of the Karino intersection to an interchange is deemed a next phase as part of the original Nelspruit Northern Ring Road project completed during 2010," he said.

The R380 million rehabilitation project between the O.R. Tambo and Van Dyksdrift interchanges in the Highveld region is 48% complete, with a completion date of March 2022.

The project is being constructed by Raubex Construction, and includes the removal and replacement of concrete slabs from the originally constructed concrete surfaced road, overlaying the entire section with asphalt, and the construction of an additional seven kilometres of passing lanes.

This 15.5km road project includes upgrading the carriageway to four lanes and the rehabilitation of the existing road.

The project is 70% complete and expected to be concluded in August 2021, said Mbalula.

"The project is worth R340 million and is situated in the rural outskirts of Mpumalanga bordered by Mozambique, where unemployment is high. Through this project, 213 local community members and 51 SMMEs between CIBD Grades 1 and 4 have been employed."

He added that the upgrade from a two-lane road to a four-lane road will benefit road users in this region in terms of ease of travel, convenience, and road safety.

The consolidation of farm accesses and additional capacity as part of the widening not only makes the N4 safer but also improves the mobility resulting in reduced travel times and travel costs.

Twitter
More in this category: « DBE publishes the updated lockdown regulations for schools. Anoj Singh concedes not spending his salary from June 2012 to July 2015. »
back to top