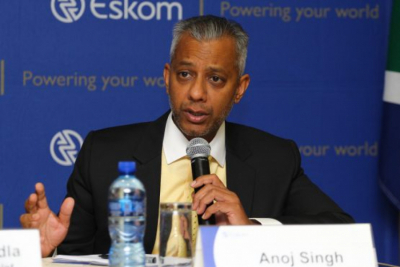 Proceedings at the Commission of Inquiry into Allegations of State Capture adjourned early on Friday due to former Transnet chief financial officer Anoj Singh’s health.

Singh’s legal representative, advocate Annalien van den Heever, asked Deputy Chief Justice Raymond Zondo that the commission adjourn for the day, after testimony from the former Transnet official on matters relating to his time at the rail and freight company.

The adjournment came as Singh, who is implicated in dodgy dealings with the Guptas in state capture, was being questioned by evidence leader Anton Myburgh about his bank statements as per the Fundudzi Forensic Report.

Myburgh told the commission Singh had many accounts with multiple banks – including 12 with FNB.

He told the commission he used an Absa account for debit orders.

The former Transnet official confirmed he had not spent his salary for three years from June 2012 to July 2015 and that he keep large amounts on money in a money-market account, which had zero interest.

On July 5 2012, Singh opened an FNB account at the Carlton Centre branch with an opening cash deposit of R200.

By July 2016, his cash in the bank had grown to R16-million, an amount that significantly exceeded his salary deposits.

Singh is implicated in numerous allegations of collusion with the Gupta family network in his roles at both Transnet and Eskom. The Gupta Leaks emails have previously revealed that he benefited on several occasions from lavish trips to Dubai sponsored by the family.

Asked how he funded his lifestyle without spending his Transnet salary before he was seconded to Eskom in August 2015, Singh said "it was concerning that the commission did not have an answer to that question" despite the commission having access to his bank statements.

"It goes to the point that the commission had these documents. You have conducted an analysis of this account. The bank statements that you have indicates that the lifestyle was funded through those bank accounts," he said.

Explaining why it took him a while for him to move money to accounts that generated interest of R100 in 2016, Singh said: "There was a need for me to maintain this account to have liquidity."

"At some point I was approached by a private banker who suggested that there’s a better way to still have access to the funding and have liquidity… and still have interest. Money market account… That’s the point in time I then agreed to open these money-market accounts," he said.

When Zondo further asked him why he thought he would need millions readily available, Singh said he could not disclose the reason publicly.

Among other deals, Singh was a key member of the Transnet leadership team when the Guptas and their companies were awarded billions as middlemen on the 1,064 locomotive procurement deals. He was Eskom CFO when the power parastatal facilitated the Gupta family’s purchase of Optimum Coal.

Twitter
More in this category: « R1.5 billion set aside for major highway upgrades. Engen refinery to be converted into a storage terminal. »
back to top