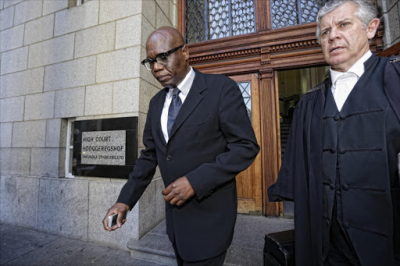 Kauthar Brown, Ebrahim Deare and Riyaad Gesant were charged with a count of wilfully aiding and abetting the activities of a gang, conspiracy to commit murder and the attempted murder of Booth.

A fourth accused, Kim Smith, was released after the charges against her were withdrawn.

Zane Killian, the man alleged to have been behind the murder plot against top cop Charl Kinnear who was gunned down last year, has also been implicated in this matter. Killian is set to stand trial alone in this matter pertaining to Booth.

The trio revealed that the leader of the TWS, who is currently imprisoned, instructed Deare and Gesant via Brown to arrange a "hit" (murder) on Booth at his home. The court heard that the trio met and planned their hit.

Deare was set to be the hitman, while Brown provided the getaway vehicle to a State witness who was instructed to drop Deare and Gesant close to Booth’s home.

The getaway driver was to pick the two men up after the hit was concluded and return them to Woodstock. The court heard that Brown had provided Booth’s address.

On April 6, 2020, the pair were dropped off. They scouted out the area to ensure the hit would be successful, but they went to the wrong address and their "mission" was aborted.

On April 7, 2020, the pair went back to the area. Deare had smoked mandrax on the day and before anything could happen he fell into a hole, injuring his leg. He had to be taken to Groote Schuur Hospital for treatment. On April 8, 2020, the duo went again, but nothing happened.

The court heard that later that night, the imprisoned gang leader contacted the duo as he had been growing impatient. They were instructed to carry out the murder the next day, April 9, 2020.

The pair were dropped close to the home of Booth. The men saw the lawyer enter his garage with his dogs. Deare, who was in possession of a fully loaded revolver, ran towards him and fired five shots with the intention of killing Booth.

The State witness told the court that the day after the shooting incident, Deare and Gesant went to Brown’s house, where she paid them for the hit on Booth.

She was also sentenced to three years’ correctional supervision for the attempted murder. The sentence includes house arrest and 960 hours of community service.

The court ordered that all the other sentences imposed must run concurrently with the sentence imposed for the attempted murder. Deare is effectively sentenced to 10 years’ imprisonment.

The court ordered that the sentences imposed for wilfully aiding and abetting the activities of a criminal gang and conspiracy to commit murder must run concurrently with the effective five-year sentence imposed for attempted murder.