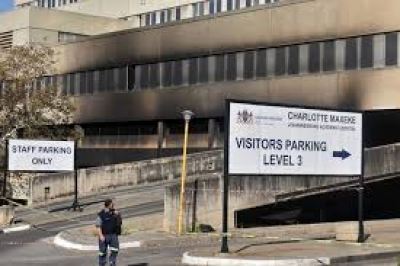 Hospital services at Charlotte Maxeke Academic Hospital are set to resume from 3 May, the Gauteng health department said in a statement on Saturday morning.

A fire gutted the special dispensary store and parking lot of the Johannesburg-based hospital last weekend.

More than 800 patients had to be transferred to 17 health facilities.

An estimated R40 million worth of "real stock" including PPE was lost in the fire.

Preliminary assessments of the building revealed the fire affected block three and four of the hospital, which will remain closed until a detailed structural assessment is completed by engineers.

Investigations into the cause of the fire are still ongoing.

The two other blocks shall remain closed until a detailed structural assessment is completed.

The department said a "phased approach" would be implemented, and that patient transfers would begin during the weekend of 1 and 2 May.

Meanwhile, Western Cape Local Government announced that another fire broke out at the Caledon Hospital on Thursday night.

MEC Anton Bredell said that firefighters were quick to react as patients were evacuated.

The cause of the fire was still unclear and was being investigated.