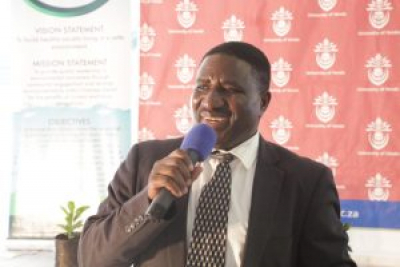 Cabinet has concurred with the recommendation by the South African National Biodiversity Institute (SANBI) Board to appoint Shonisani Munzhedzi as the CEO of the entity.

Munzhedzi’s appointment was confirmed by the Cabinet.

Both the Minister of Forestry, Fisheries and the Environment, Barbara Creecy, and Deputy Minister, Makhotso Sotyu, have welcomed Cabinet’s concurrence of Munzhedzi’s appointment.

"Munzhedzi’s appointment comes amid the public consultation into the Revised National Biodiversity Framework 2019 to 2024, which is an important policy instrument for the management and protection of species and ecosystems. SANBI is closely involved in the preparation of the National Biodiversity Framework, and a bioregional plan or biodiversity management plans," the Department of Forestry, Fisheries and the Environment said.

"Munzhedzi brings with him a wealth of experience, having most recently served as the Deputy Director General: Biodiversity and Conservation in the Department of Forestry, Fisheries and the Environment.

"He has served in numerous environment and conservation portfolios in his more than 26 years of experience in public service. This has included serving the department in areas of Climate Change Adaptation, Conservation and Biodiversity Management," the department said.

Munzhedzi served as the Senior General Manager responsible for Environment and Tourism in Limpopo province.

"While working for the City of Johannesburg, he served in the Joburg City Parks as a General Manager for Environment, Conservation and Development, and then as Director of Natural Resources Management in the City.

"He holds the Master’s Degree in Environmental Management specialising in Conservation Management (UFS) and Master in Business Leadership from UNISA."

Munzhedzi also served as a country lead negotiator on a number of Multilateral Environmental Agreements. He represented the country in, among others, the United Nations Convention of Biodiversity (UNCBD), UN Convention to Combat Desertification (UNCCD) and the UN Framework Convention on Climate Change (UNFCCC).

He was instrumental in the establishment of the Intergovernmental Science-Policy Platform on Biodiversity and Ecosystem Services (IPBES).

Twitter
More in this category: « 'Phased approach' to be implemented when Charlotte Maxeke hospital services resume in May. Sandton City evacuated after bomb threat. »
back to top