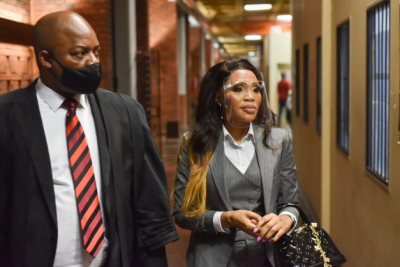 Norma Mngoma will testify at the state capture commission on Monday, the inquiry confirmed.

Mngoma’s testimony was initially scheduled to take place earlier this month, but she pulled out of the proceedings at the last minute. Her lawyers told Deputy Chief Justice Raymond Zondo that she was unwilling to continue assisting the commission by testifying.

This drew the displeasure of Judge Zondo, who threatened to issue a summons to ensure Mngoma’s appearance. It is unclear whether her appearance today will be because a summons was issued.

The inquiry is also expected to deal with former minister Malusi Gigaba’s application to cross-examine Mngoma, his estranged wife.

It is likely that Gigaba will object to Mngoma’s evidence being heard in public. The couple is reportedly separated and undergoing divorce proceedings.

Mngoma had long promised to testify at the inquiry, to reveal what she knew about Gigaba’s alleged relationship with the Gupta family. Her desire to speak out was partly sparked by her arrest by the Hawks in July last year, which resulted in her spending a night in jail.

She was accused of damaging a R3 million Mercedes-Benz G-Wagon. Her devices were confiscated during the arrest, and she believed that information linked to Gigaba has been wiped from her devices.

Mngoma believed Gigaba had orchestrated her arrest. Her estranged husband has publicly denied being involved in the incident.

The high court ruled in February that her arrest was unlawful and an abuse of power. Mngoma plans to sue the Hawks for the unlawful arrest. The National Prosecuting Authority in March decided to withdraw the charges provisionally because of the high court ruling.

In a television interview with eNCA in December, Mngoma disclosed that she had been to the Gupta’s Saxonwold compound with Gigaba.

She alleged that Gigaba would frequently visit the Gupta family’s infamous compound when he served as minister of public enterprises.

The former minister stated that he had been called to testify at the commission from March 8 to 12, but his evidence has yet to be heard.

He bemoaned not being permitted to cross-examine witnesses who had implicated him.

Twitter
More in this category: « Body of Lindani Myeni who once appeared on idols is set to arrive in South Africa. Covid-19 Daily Update: SA records 1101 new cases with 23 related deaths. »
back to top