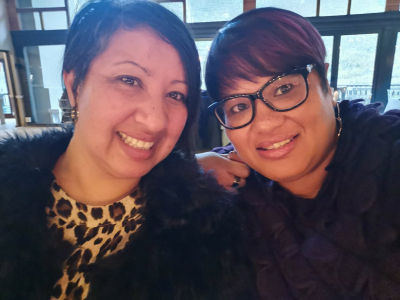 File: Nadia Goetham(Right) with at her cousin's wedding in the heart of winter in 2019 in the Boland.

Her family confirmed that she passed from a Covid-19-related illness yesterday.

In a short statement released last night, the Goetham family said details of the memorial service and funeral would be announced in due course.

The family said: “Nadia, who carved her early career in print journalism and later made her mark in the book publishing arena, will be sorely missed by her family and friends. Her death was swift and untimely. Our hearts are shattered.”

Publishing house, Black Bird Books founder, Thabiso Mahlape, said Goetham believed in Blackbird Books when no one else did.

"When we were written off and blackballed, Nadia stood up for us, sometimes at great personal cost.

"If anything, we will seek to carry on if only to see her dream for us to become a reality. As she so often said: ’Where there's a will, there is a way.’ We will try to find our will again."

Mahlape said that out of respect for Goetham, BlackBirdBooks would attend to only urgent queries which could impact on certain orders.

Meanwhile Minister of Sport, Arts and Culture Nathi Mthethwa has paid tribute to publisher, Goetham, describing her as a literary powerhouse.

Goetham passed away on Sunday due to COVID-19 related complications.

"Not only did she understand the importance of books and storytelling, she was extremely passionate about developing others. She believed in people and helped first-time authors to believe in themselves and the power to tell their stories," the Minister said in a statement on Monday.

Goetham carved her career in print journalism and went on to establish a fruitful career in the publishing arena, where she created a monumental impact.

She joined Jacana Media in 2015; first as a production manager, and then went on to fulfil her highest calling as a publisher.

"She validated the dreams of others and will always be remembered for her contribution to the world of literature. Her legacy will live on in every author she poured into and every life she touched," Mthethwa said.

The Department of Sport, Arts and Culture has extended its deepest sympathies to her family, friends, book lovers and the literary world at large.

The department said Goetham’s passing is undoubtedly a huge loss to the literary industry.