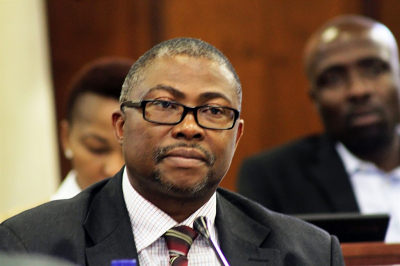 The former head of Transnet, Siyabonga Gama, said allegations that he received cash from the Gupta family and their associates were "fiction".

He began by reading parts of a prepared statement that effectively accused the Popo Molefe-led board that ousted him in 2018 of being incompetent and that he had been targeted because of his decision to challenge the grip of established mining companies on Transnet’s operations.

He also rejected Molefe’s earlier assertion that he was one of the three "architects of state capture", saying Molefe had provided no evidence of this.

On the contrary, he had been appointed on merit and not through the interference of then public enterprises minister Malusi Gigaba, Gama protested.

Gama returned to the commission after testimony from a witness about amounts of cash that were seen in Gama’s car.

During previous testimony before the State Capture Commission, Witness 2 made the following allegations against Gama:

During his appearance on Monday, Gama denied these allegations, labelling most of them as "fiction".

However, he confirmed that his driver "may have" dropped him off on at least one occasion at the notorious Gupta family home in Saxonwold, Johannesburg.

After Gama’s statement concluded, commission evidence leader Anton Myburgh dived straight into his examination of Gama’s past by asking him if he had been invited to the Gupta family’s much-publicised and controversial wedding hosted at Sun City in 2013.

"Evidence is going to be led at this commission, shortly, that at the Guptas they had a cash-dispensing machine … an ATM machine."

This revelation emerged when Myburgh was responding to Gama’s attempts to mock numerous allegations that he had been given large amounts of cash on an ongoing basis by the Guptas and/or their associates.

Myburgh responded, however, that there was apparently no shortage of cash in Gupta circles, as numerous witnesses had made it clear that the family and their associates had access to several large safe-deposit boxes and that evidence would shortly be heard that the Guptas even had a personal cash-dispensing ATM, which he implied was at their residence, without explicitly saying so.

"This commission has heard a raft of evidence about there being lots and lots of cash used by many, many senior executives. So what it perhaps turns on is how many occasions you in fact went to the Guptas. You say you only went there once," Myburgh told Gama.

Deputy Chief Justice Raymond Zondo said Gama would return to the commission at a date to be confirmed.

Meanwhile the United Kingdom announced that it has imposed sanctions against the controversial Gupta family, and its associate, Salim Essa.

This was announced on Monday by the UK’s Foreign Secretary Dominic Raab under the new Global Anti-Corruption regime.

"Corruption has a corrosive effect as it slows development, drains the wealth of poorer nations, and keeps their people trapped in poverty. It poisons the well of democracy," said Raab.

"The individuals we have sanctioned today have been involved in some of the most notorious corruption cases around the world."

He said that global Britain is standing up for democracy, good governance, and the rule of law.

Twitter
More in this category: « Livestream: Malusi Gigaba & Norma Mngoma battle it out at state capture. Government to support small businesses to reach their potential. »
back to top