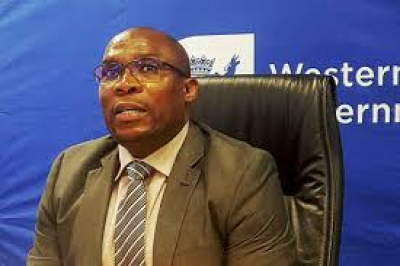 Bonginkosi Madikizela has resigned as the DA’s Western Cape leader and MEC amid the furore over his qualifications.

Madikizela, who was the Transport and Public Works MEC, submitted his resignation from both positions on Wednesday.

He was re-elected as the party’s Western Cape leader during its provincial congress in November last year.

Recently, however, Madikizela has been under fire, both as MEC and senior DA leader, following revelations that he lied about having a BCom degree.

In a statement on Wednesday afternoon, Jaco Londt, the DA provincial chairperson, said: "We wish to thank Bonginkosi for his service as party leader since his election to the position of DA Leader in the Western Cape in 2018. Bonginkosi served as the leader for more than three years.

"We respect his decision and the honourable route he has taken by stepping down as leader... We look forward to working with him as a colleague in the DA going forward."

Albert Fritz will remain the acting provincial leader until the DA elects an interim leader at the provincial council on May 29. Madikizela offered "no comment" on his resignation from the party.

He was to contest the position of City of Cape Town mayor ahead of this year’s local government elections.

Premier Alan Winde said in a statement: "Today, Bonginkosi Madikizela tendered his resignation from the Western Cape cabinet, which I have accepted. I believe that his decision under the circumstances was the right and honourable thing to do.

"Madikizela has worked hard in both the Human Settlements and Transport and Public Works portfolios, and I wish to thank him for the valuable contribution he has made to delivering progress in our province over the years.

"Tertius Simmers will continue to act as Minister of Transport and Public Works, in advance of a further statement I will make on my cabinet composition shortly.

Twitter
More in this category: « City of Joburg offers relief measures for ratepayers amidst ongoing COVID -19 pandemic. Supra Mahumapelo suspended from the ANC for 5 years. »
back to top