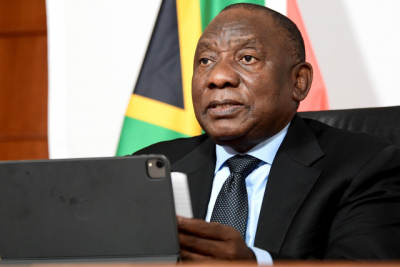 President Cyril Ramaphosa, who appeared before the State Capture Commission has defended the ANC’s policy of deployment of its members into the public service, which he says is an important part of implementing the ruling party’s mandate.

Ramaphosa, who was speaking wearing a cap as president of the ANC, also insisted that there is abundant evidence that the ANC is determined to clean up its act and the excesses that happened under state capture will never occur again.

In his opening statement to the commission, Ramaphosa was asked to specifically address the issues of cadre deployment and party political funding, both regarded as key drivers of corruption and state capture. The ANC deployment committee is chaired by the ANC’s deputy president — a position Ramaphosa occupied when state capture took hold

While conceding that, at times, people had been appointed to positions for which they were not qualified, Ramaphosa said that the political deployment of party members into the civil service was practised widely by many governments in the world for good reason. Deployment was not inconsistent with public servants carrying out their duties in a fair, balanced and non-partisan manner, he said.

"It should be noted that the deployment of cadres to strategic positions is not unique to the ANC. It is practised in various forms and through various mechanisms — even if not always acknowledged as such — by other political parties in SA and in other countries."

In our view, cadre deployment has acquired such prominence in part because of the perspective that there should be no political interference in the selection of people who work in the public sector. However, international practice suggests a more nuanced approach to this matter," he said.

Ramaphosa quoted a 2007 Organisation for Economic Co-operation and Development paper on public governance that states "political involvement in administration is essential for the proper functioning of a democracy".

He said the aim of the ANC’s cadre deployment committee was to ensure individuals "most fit for purpose" are appointed to critical positions in the government.

"And right now as we look at that past slate, we are able to look at it and say we actually need to do things differently [and] move away from those types of deployments that happened and ended up, some of them, being deployments that were not fit for purpose," Ramaphosa said.

While acknowledging he needed to get more information about the appointments, Ramaphosa said each appointment should have been based on merit, not patronage.

The government is working to professionalise the civil service in order to increase the capacity of the state, Ramaphosa said.

He said he was obsessed with this because many of the challenges when it came to implementing government policies were due to a lack of skills in critical posts.

Ramaphosa said the National School of Government (NSG) was established to deal with skilling and capacitating people.

"We want to move to the point where nearly everyone in the public service, from the president right down, does attend lessons and courses in the school of government on an annual basis."

Ramaphosa said his administration took the blame for this and this would be addressed.

"We are not about to chuck those people out, if anything we as the state are to blame for having brought in people who are ill-qualified.

"We need to address the problem humanely, taking into account the mistakes we have made and the rights of those people and it calls on us to be innovative on how we are going to capacitate all these people," Ramaphosa said.

Ramaphosa said the ANC’s deployees in government cannot be seen to be partisan when executing their duties.

He said the government needed to guard against partisanship and ensure public servants were neutral when interacting with citizens.

"The ANC 54th National Conference recognised this problem and resolved that ‘the merit principle’ must apply in the deployment to senior appointments, based on legislated prescripts and in line with the minimum competency standards,"he said.

Meanwhile the Democratic Alliance (DA) said it felt vindicated about its take on the African National Congress (ANC)'s cadre deployment policy, which Ramaphosa spoke extensively about during his first appearance at the state capture commission earlier today.

In a statement, the DA said it warned in 1997 about the dangers posed by the policy - including the capturing of the state through the deployment of party loyalists.

The DA said warnings about the cadre deployment policy two decades ago, were dismissed as racist and anti-transformative.

But the main opposition party said it now became clear that it was right all along, and that cadre deployment would inevitably lead to large-scale state capture.

The ANC cadre deployment policy is intended to have loyal party hands on all the levers of power in government.

Twitter
More in this category: « Supra Mahumapelo suspended from the ANC for 5 years. Livestream: ANC President Cyril Ramaphosa returns to the state capture inquiry. »
back to top