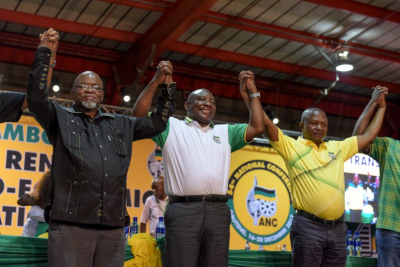 President Cyril Ramaphosa has stuck to his guns that he was never privy to the financial records of his 2017 ANC presidential campaign, known as the CR17 campaign.

Ramaphosa reiterated his claim the CR17 campaign managers took a deliberate decision to protect him from the financial contributions of his donors.

He said this was done in order to protect him from being compromised as a candidate.

Ramaphosa said he was not aware of the donation and that the money was solicited by one of his colleagues who was involved in the CR17 campaign.

"Up to today, I don’t know how those funds have been managed. I did meet some of the people who gave money at dinners to explain precisely what we were seeking to achieve by my candidature and that’s where it ended," Ramaphosa said.

He said he had also contributed money towards his campaign.

Ramaphosa suggested that the colleague, who he did not identify, wanted Watson to personally donate the money and not from his corruption-accused company, Bosasa.

"He seems to have said, ‘I want you to give money personally from your own money and not from the company itself.’ So, that is what I believe he seems to have done. So, of course as the story was made public, it seemed like it came from Bosasa. I don’t remember the finer details, I think it came from him or one of his companies or accounts, "Ramaphosa said.

"I was far away from the finances for the CR17 campaign for the reasons that I’ve articulated that the managers did not want me to know."

Ramaphosa also rubbished claims that his campaign raised R1 billion from various donors who wanted him to replace Jacob Zuma as ANC president.

"It was never a billion rand. I’m told the money that was raised was some R300 million or so but never a billion. But I don’t know the full facts because they literally decided to keep it away from me."

At the same time, Ramaphosa also denied claims the CR17 campaign was involved in vote buying at the ANC’s 54th national conference in Nasrec, Johannesburg.

Any suggestion that there was corruption in the CR17 funds was rejected, said Ramaphosa.

He said that with hindsight the ANC would not have knowingly accepted donations from corruption-accused company Bosasa.

The commission’s evidence leader, advocate Paul Pretorius, quizzed him about why the ANC continued to receive millions in donations and benefits from Bosasa despite the company being under investigation for contracts awarded to it by government departments under suspicious circumstances.

Ramaphosa said the ANC would have not "knowingly and intentionally accepted donations from companies or donors who have been involved in criminal activity".

He was also asked about election war rooms established for the benefit of the party by Bosasa at its Krugersdorp headquarters. The election centres were created in the run-up to at least three previous elections.

Ramaphosa said he was not aware that the company was paying for the centres, which he once visited as ANC deputy president.

"I think it’s a very valid question and one should have been aware at an earlier stage about all this," Ramaphosa said.

He said at the time, ANC treasurer-general Zweli Mkhize and other "colleagues" knew that Bosasa was funding the operations.

"I went to the election centre which Bosasa helped to finance during the election campaign. And even then, it never really, I must be honest, never occurred to me that they were bankrolling or financing fully that centre on behalf of the ANC.

"With hindsight, as they say, hindsight is an exact science, we should have been more alert particularly to those reports that emerged a lot earlier."

Ramaphosa said according to his recollection, there had been a period of about nine to 10 years when the corruption allegations against Bosasa were well-known.