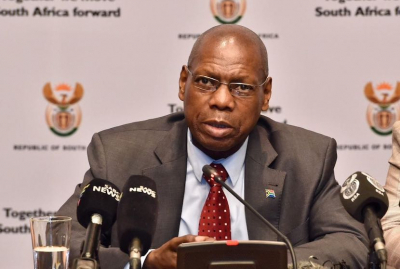 The resurgence of the Covid-19 pandemic in India has prompted the South African government to consider introducing additional measures in order to stave off a third wave.

Health minister Zweli Mkhize told an online conference that a close eye was being kept on India, which has now the highest Covid-19 infection rate in the world.

"The challenges we have seen in India are very serious," Mkhize said.

"We have received an advisory from the ministerial advisory council that we have to consider some restrictions and we are now going through that, "he said, without giving details.

Covid-19 infections in Africa’s most-industrialised economy have fallen from about 22,000 a day in January to fewer than 1,000, even without a large-scale vaccination campaign.

Meanwhile India’s total COVID-19 cases have passed 18 million after another world record number of daily infections, as gravediggers worked around the clock to bury victims and hundreds more were cremated in makeshift pyres in parks and parking lots.

India reported 379,257 new infections and 3,645 new deaths on Thursday, health ministry data showed, the highest number of fatalities in a single day since the start of the pandemic. However, medical experts believe India’s true COVID-19 numbers may be five to 10 times greater than the official tally.

The world’s second-most populous nation is in deep crisis, with its hospitals and morgues overwhelmed. Each day, thousands of Indians search frantically for hospital beds and life-saving oxygen for sick relatives, using social media apps and personal contacts. Hospital beds that become available, especially in intensive care units (ICUs), are snapped up in minutes.

India’s military has begun moving key supplies, such as oxygen, across the nation and will open its healthcare facilities to civilians. Hotels and railway coaches have been converted into critical care facilities to make up for the shortage of hospital beds.